Black-legged Kittiwakes (Rissa tridactyla) are more familiar to New Brunswickers as winter migrants offshore than as breeding birds. These small, graceful gulls, unlike their more familiar rowdy relatives Herring (Larus argentatus) and Great Black-backed Gulls (L. marinus), nest on narrow ledges on cliffs; their common name is onomatopoeic, reflecting their high-pitched calls echoing off the cliffs of their colonies. Kittiwakes differ from other gulls in not scavenging their food, but subsisting on whatever small schooling prey (juvenile fish, euphausiid shrimp, squid etc.) is most available; they do not follow boats as Herring and Great Black-backed Gulls do. They breed in arctic and boreal waters of both the North Atlantic and North Pacific oceans and are widely used as indicators of ocean health.

The first breeding colony in our Bay of Fundy waters was discovered on South (or Southern) Wolf island, on the cliffs below the lighthouse at the southern tip of the island, in 1992 by Pat Kehoe (Kehoe 1994). This small colony (12 pairs in 1992) increased to a maximum of 135 nests until a post-tropical storm washed many off the cliffs in 1996 (Kehoe and Diamond 2001). A second colony of at least 4 nesting pairs was confirmed on Whitehorse Island, 12 km to the north-west, in July 1998; numbers at the two sites were recorded between 1992 and 1999, when there were over 100 nests at the two colonies combined.

The presence of the colony on Whitehorse was instrumental in having the island included in the New Brunswick Provincial Natural Areas (PNA) system as a Class I preserve. The South Wolf colony, now part of a Nature Preserve of the Nature Trust of New Brunswick, seems to have been more or less abandoned, as A.W.D. (pers. obs.) has not seen any nests there in recent visits. The Whitehorse colony has persisted and is commonly visited by whale-watching and ecotour vessels, who often encounter fishing activity close under the cliff; PNA regulations do not protect surrounding waters and recent declining numbers give cause for concern (Todd Watts, pers. comm.).

On the afternoon of 8 June 2019, the authors and others took part in a Festival of Nature field trip to the Wolves archipelago on a fishing vessel from Blacks Harbour. We motored slowly around all the islands except East Wolf, which has no known bird colonies and is lightly inhabited in summer by people from Beaver Harbour. No kittiwakes were seen at the former colony on the cliffs of South Wolf, but as we circled around Green Rock a few kittiwakes were seen on cliffs in a deep cleft in the cliffs on the east side (Figure 1). Closer inspection showed six occupied nests on the left (south) side of the gully and four on the opposite cliff; there could have been a few more out of sight. From the photos it can be seen that several of the nests are close to the vegetation at the top of the cliff, with one apparently built on turf rather than rock, but most are on rock ledges as is typical for the species. 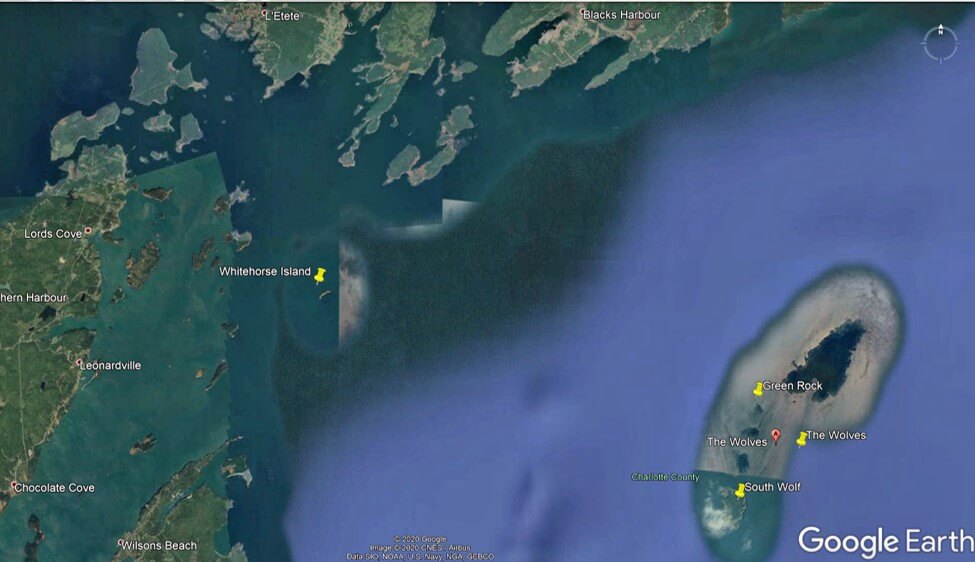 Following the discovery of the South Wolf colony over 20 years ago, one of us (A.W.D.) has frequently described it as the southernmost kittiwake colony in the world. At the FoN banquet on the evening of the Green Rock colony discovery, the small colony on Pearl Island in Mahone Bay, NS was brought to his attention. At latitude 44.38?N, Pearl Island is about 62 km south of South Wolf. There were at least 40 pairs of kittiwake nesting on Pearl Island in 2014 (Blake Maybank, in litt.).

We thank Captain Eric Ingersoll of Andrew & Deane for getting us safely to and from the Wolves, and particularly for manouevring his vessel to give us a good view of the nesting birds. 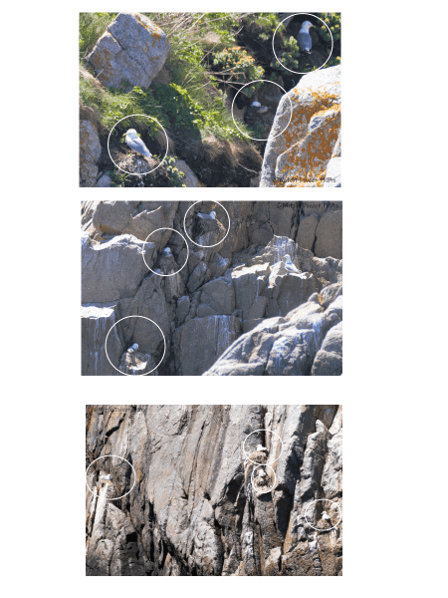 Figure 2. Kittiwake nests on Green Rock, 8 June 2019. From top to bottom, the first two photos show the south side of the gully, the last photo shows the north face.