If you have a bat box I want to know about it!

February 26, 2021 — Bats in Canada face multiple threats from habitat loss and disease. As towns and cities expand, the large old trees that bats call home are being cleared, and bats are losing their roosts. Bats need a warm and secure place to roost during the day in the summer. A bat box is a simple and effective way to provide additional roosting habitat for bats, but little is known about bat box use in Canada. This is especially important as three bat species in Canada are listed as endangered: little brown bats, northern long-eared bats, and tricolored bats. Bats now face additional persecution due to worries about COVID-19, but bats in North America do not have the virus that causes COVID-19.

Which bat species use bat boxes?

Of the 18 bat species that are regularly found in Canada, 13 have been documented using bat boxes, although these data come from studies farther south in the United States. Current recommendations on bat box design are based on research in the United States, especially Texas, and in Europe. Since the box design bats prefer varies by region and species, more information on bat boxes in Canada is urgently needed. There is very little previous research about which bat species prefer which bat box designs in Canada. Little brown bats are known to use bat boxes throughout Canada, big brown bats use boxes in some parts of Canada, and Yuma bats use boxes in British Columbia. 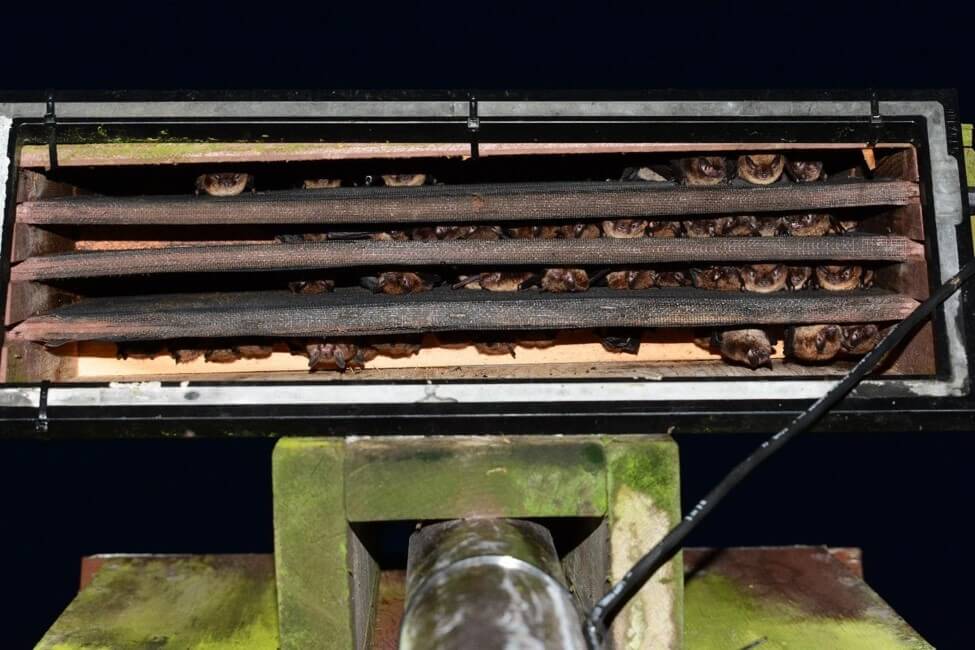 | Little brown bats in a bat box in the Maritimes. Photo by Jordi Segers.

How you can help!

Our research seeks to determine which bat species use bat boxes across Canada, what box designs are preferred by bats, and which temperatures bats prefer for roosting in our northern climate. To accomplish this, we need to know where bat boxes are located in Canada, the physical characteristics of the boxes, and whether they are being used by bats! Participants will be sent temperature loggers to install in their box and supplies to collect guano (bat poop), as bat species can be identified from guano.

If you have a bat box and would like to participate in this study, please fill out this online multiple-choice survey with questions about your bat box. Your participation is important even if your box does not have any bats!

This project is in partnership with the Wildlife Conservation Society and the Canadian Wildlife Federation.

More information about which box designs bats use in Canada will help bat conservation by providing recommendations for improving bat box design and placement in our northern climate.

Why install a bat box?

Installing a bat box gives bats an alternative to roosting in your house, and since all bats in Canada eat only insects, you may even notice a decrease in the insect population around your house! Bats eat a variety of insects, including agricultural and forestry pests. You can watch bats swooping around your backyard at dusk catching insects in midair.

How do I tell if bats are using my box?

You can tell whether your box is being used by bats by searching for guano underneath your box and watching your box at sunset in June to count bats as they emerge for an evening of eating insects. You can watch an example of bats flying out of bat boxes in Prince Edward Island here. You can also shine a light up into the box during the day to see if there are bats inside from May to October in Canada. The boxes will be too cold for bats during the winter.

How do I get bats to use my box?

Not all bat boxes will be occupied in the first year after installation. Occupancy depends on many factors, ranging from the period in which it was installed to the fact that bats are very selective and might need a little time to familiarize themselves with your bat box. There are no lures or attractants, such as guano, that can attract bats to a bat box, although larger bat boxes with multiple chambers more commonly attract bats than smaller boxes.

Bat boxes are most successful when attached to houses or poles as opposed to trees. Trees shade the box and can block access to the box entrance. If bats are not using your box after two years, try moving the bat box to a new location. 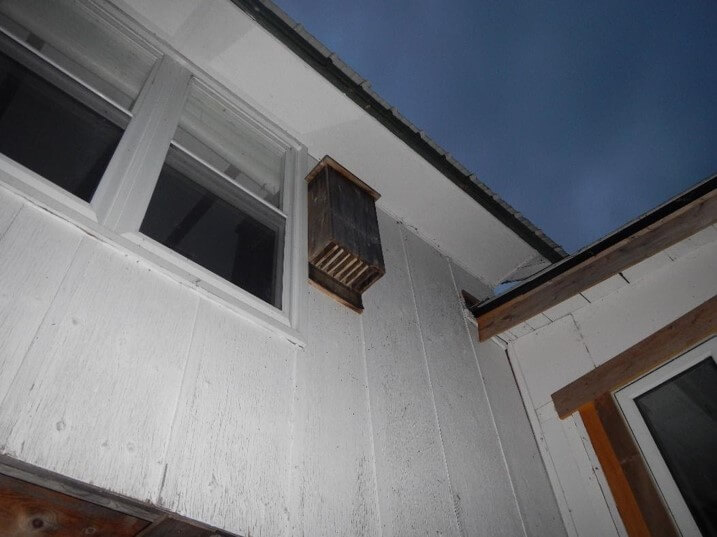 | This bat box on the side of a house in New Brunswick houses little brown bats and their pups during the summer. Photo by Karen Vanderwolf

Our research group measures the temperature inside bat boxes using temperature loggers that can take a reading every hour over the whole summer. One way to ensure that bats can choose their preferred roosting temperature is to install multiple bat boxes as they will vary in temperature depending on how much direct sunlight they receive.