My first Christmas Count was on a bitter day in late December of 1963. I was an inexperienced kid of 16 and David, a university student with a driver’s license, picked me up at dawn and together we birded the Lepreau Count Circle, ending up at the tip of Point Lepreau in the early afternoon with a frigid wind and swirling sea smoke. I remember that day vividly, not just because of the cold, but also because I added several new birds such as Purple Sandpiper, Common Murre, and Harlequin Duck under David’s excellent mentorship. It was my first real Christmas Count and I was hooked.

David recalls that he did his first Christmas Bird Count in Saint John in 1957, after Dr. Austin Squires, Curator of Natural Science at the New Brunswick Museum, reached out for local volunteers in the fall edition of Nature News, a long-time Museum publication. David did his portion of the Count Circle on his own with his mother at the wheel of the family car.

I asked David what sparked his interest in birds. His enthusiastic answer: “the birds!” What he really meant was that he became fascinated at an early age when following his hunter father on fall trips to bag Ruffed Grouse. He was also influenced by his mother and his Aunt Florence Christie, both of whom had a considerable interest in birds.

Following that initial Christmas Count in 1957, David became increasingly involved in Counts across New Brunswick, participating at various times in at least 15 Count Circles from Grand Manan to Plaster Rock. Some of these became annual events while others were occasional, depending on available time. By 1968, he was acting as Compiler (the organizer) for the counts at Lepreau, Saint John, and Fundy Park.

Soon after university, David became Park Naturalist at Fundy National Park and in 1969, the successor to Dr. Austin Squires at the NB Museum following Dr. Squires’ retirement. Early in that new position David took on the role of Provincial Coordinator for Christmas Counts, a task he’s faithfully performed until recently. During those nearly 50 years, he may have summarized and analyzed the results of nearly 2,000 individual Counts involving who knows how many thousands of birds. No one has had more involvement with Christmas Bird Counts in New Brunswick than David Christie! 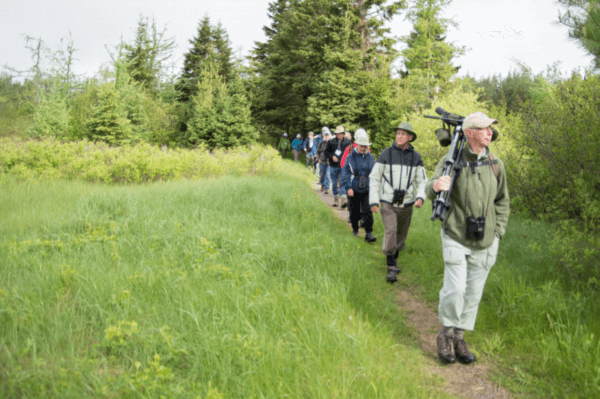 Photo: Jim Wilson leads a birding excursion at the 2017 Festival of Nature.

When you talk with David about Christmas Bird Counts he will tell of adventures in all kinds of winter weather, much of it before the availability of cell phones. He’ll recall his vehicle inconveniently breaking through the ice of an extensive frozen puddle on a remote back road and trudging to the nearest house to call a tow truck. He’ll also recount finding exciting new personal birds such as Black-headed Gull, Townsend’s Solitaire, and Harris’s Sparrow while participating in Christmas Counts.

David is still at it after 63 years, participating annually in the Moncton, Riverside-Albert, and Fundy Park Counts and as often as possible at Hillsborough, Memramcook, and Quispamsis-Hampton. What keeps him going? The chance to get out in the fresh air, the curiosity of what might be out there, the opportunity to see familiar faces of both birds and people, and the satisfaction of contributing to a growing body of knowledge of our provincial avifauna. And perhaps, just perhaps, finding something unexpected. We can all relate to that!

Thank you David, for all you have given us.

Find a Christmas Bird Count in your region!