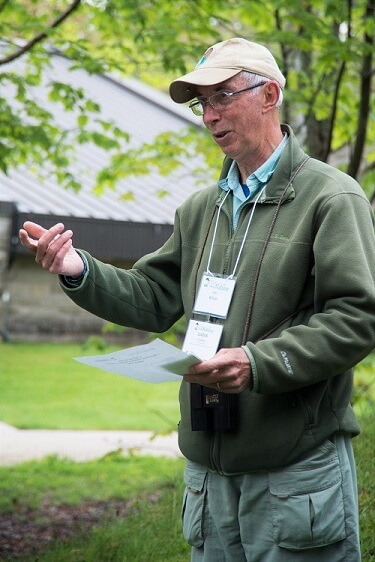 NOVEMBER 1, 2019 — It was an unassuming summer morning when Jim Wilson learned that he was being named to the Order of New Brunswick.

“I had no idea I had been nominated until I received a call one morning in July from the Chief Justice of [New Brunswick] with the good news,” says Wilson.

The Order of New Brunswick (ONB) is the highest civilian honour bestowed in the province. First awarded in 2002, the ONB recognizes “outstanding contributions to the social, cultural or economic well-being of New Brunswick and its residents,” (Government of New Brunswick n.d.). Past recipients include artists, athletes, politicians, writers, educators, scientists, businesspeople, and many, many more.

Wilson joins fellow New Brunswick naturalist Dr. Mary Majka in the ranks of those recognized. Mary, invested in 2005, is one of the founding members of Nature NB. Throughout her long and storied life, she was a passionate advocate for nature in the province and worked on projects related to heritage, conservation, education, advocacy, and more. Mary was also instrumental in naming the Black-Capped Chickadee as the provincial bird of New Brunswick (Government of New Brunswick 2005). But Wilson was quick to note the differences between himself and the famed naturalist.

“Mary was a much different personality than me,” says Wilson, laughing. “Mary was undeniable, if [she] got something under her bonnet, she would march with it. I operate differently than that of course, but it’s a wonderful feeling to be in the same order. But it’s for much different reasons. Mary was a real visionary and somebody who really changed things in a big way, a very direct way.”

“Mary was a real visionary.”

A lifelong lover of nature, Wilson names his father as his inspiration for his interest in birds. The two would walk together on the abandoned farms surrounding their home, with Wilson sometimes on his father’s shoulders. While attending the University of New Brunswick, Wilson had thought about becoming a wildlife biologist, but ultimately studied accounting. He would go on to work in the soft drink industry, as the Chief Financial Officer at Maritime Beverage Ltd., and later in the same position at Pepsi Cola Canada for the Atlantic region (Government of New Brunswick 2019).

Throughout his tenure in the soft drink industry, Wilson never lost his appreciation for nature. He remained an active birder, co-founding the Point Lepreau Bird Observatory in 1996. It was really after his retirement in 2002, however, that Jim was able to fully devote his time and efforts to naturalist work. Wildlife biology may not have been the right path for him as a university student, but it’s clear from his wealth of experience over the past couple of decades that he undoubtedly would have found success there, too. 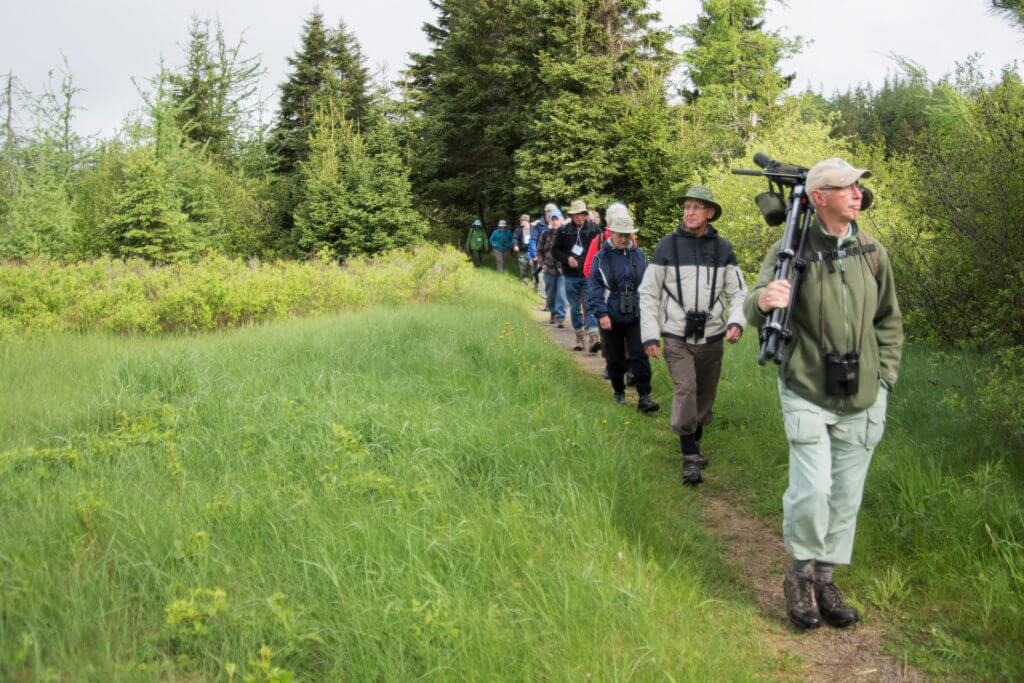 Photo: Wilson leads a group of birders at the 2017 Festival of Nature

If Wilson’s life’s work has shown anything, it’s that he has an insatiable sense of curiosity that will continue to carry him forward, and that spirit doesn’t seem to be fading anytime soon; he doesn’t plan to rest on his laurels in the wake of this recognition. He is hopeful that his new role will open some doors for him to have his voice heard at the provincial level.

“And you just might get your toe into the door, to be able to talk to somebody or say something that would have a little more input, and you know, that’s important. It’s very important.”

“And you just might get your toe into the door, to be able to talk to somebody or say something that would have a little more input, and you know, that’s important.”

The ONB is one of many in a long list of credits that Wilson has to his name. He has done extensive committee and board work, including serving on the board for Nature NB for many years. He can be heard on CBC Radio sharing his wisdom about birds, and also travels across the province giving presentations to New Brunswickers. In 2018, Wilson was awarded the Roland Michener Conservation Award from the Canadian Wildlife Federation, an award given annually to individuals who have a demonstrated commitment to conservation (Canadian Wildlife Federation n.d.). He was recognized for that award for being a key player in the advancement of knowledge about birds in New Brunswick, and for establishing the Point Lepreau Bird Observatory, an invaluable resource for information about seabird migration along New Brunswick’s Fundy Coast (Canadian Wildlife Federation 2018). The Point Lepreau Bird Observatory was also one of the determining factors for Wilson’s nomination to the Order of New Brunswick.

But what Wilson’s official Order of New Brunswick bio doesn’t reveal is the fact that the initial motivation behind the nomination didn’t really factor in Wilson’s public work at all. Wilson was nominated by a former neighbour whose children had spent a lot of time with Wilson when they were young. Wilson taught them about birds and about nature, and now that those children are grown, they continue to be involved and interested in nature. Seeing the impact that Wilson had on the neighbour’s children, and presumably, on the countless other people that Wilson had met in his lifetime, was a signal to his nominator that this was someone who deserved to be recognized.

Wilson confirmed that education about nature has always been an important way for him to create change in his community and to, hopefully, spark an interest in the people that he connects with. For people who haven’t been raised in nature, that appreciation doesn’t always come easily, but for those who have met Wilson or attended one of his talks, it’s fair to say that his passion is infectious. 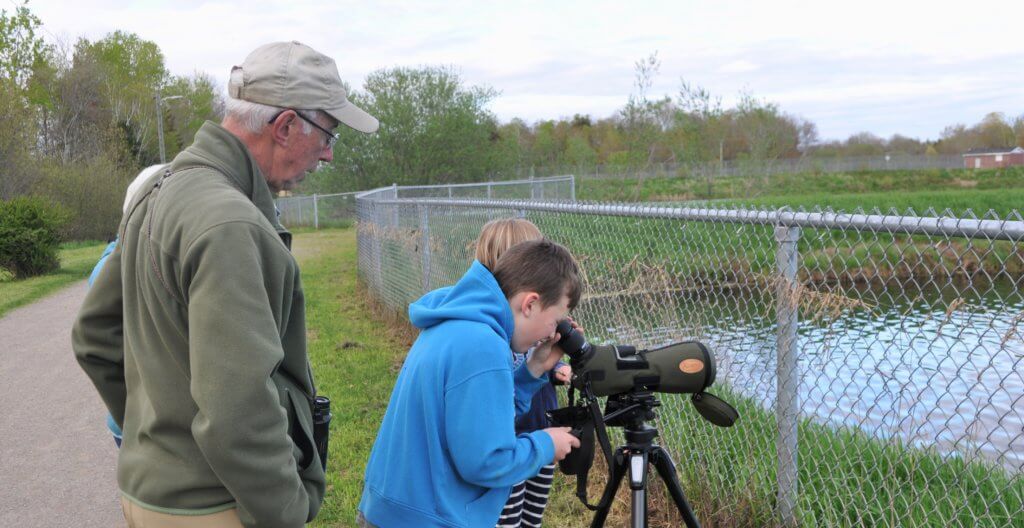 “And so you make a connection to nature in various ways through talks, Monarch Butterflies are a prime example… It makes a difference. And suddenly, it may open a little crack for somebody to get a spark of interest, and one thing leads to another, to another, to another. And so those are the kinds of things that I feel really strongly about.”

Beyond the work that he’s done for bird conservation, Wilson is also involved in Monarch Butterfly tagging in the province. While observing seabirds at Point Lepreau, Wilson noticed that the butterflies were coming through the same area and possibly even migrating along the same route. After attending a Monarch tagging workshop in New Jersey, Wilson brought the initiative back to the province, where he and the Saint John Naturalists’ Club continue the work. In 2019, they tagged 1,100 butterflies and are hoping for an even better year in 2020.

When asked how he was feeling on the eve of his investiture into the Order of New Brunswick, Wilson was all smiles. He was excited, a little bashful, but mostly just eager to get to work and get acquainted with his new title.

“So, with something like this comes a sense of responsibility, you know, it’s not just, ‘Isn’t it nice to get this?’ But now you’re saddled with a bit more of a profile on the basis of nature that, hopefully, you can do something positive with. That’s what I’m hoping.” 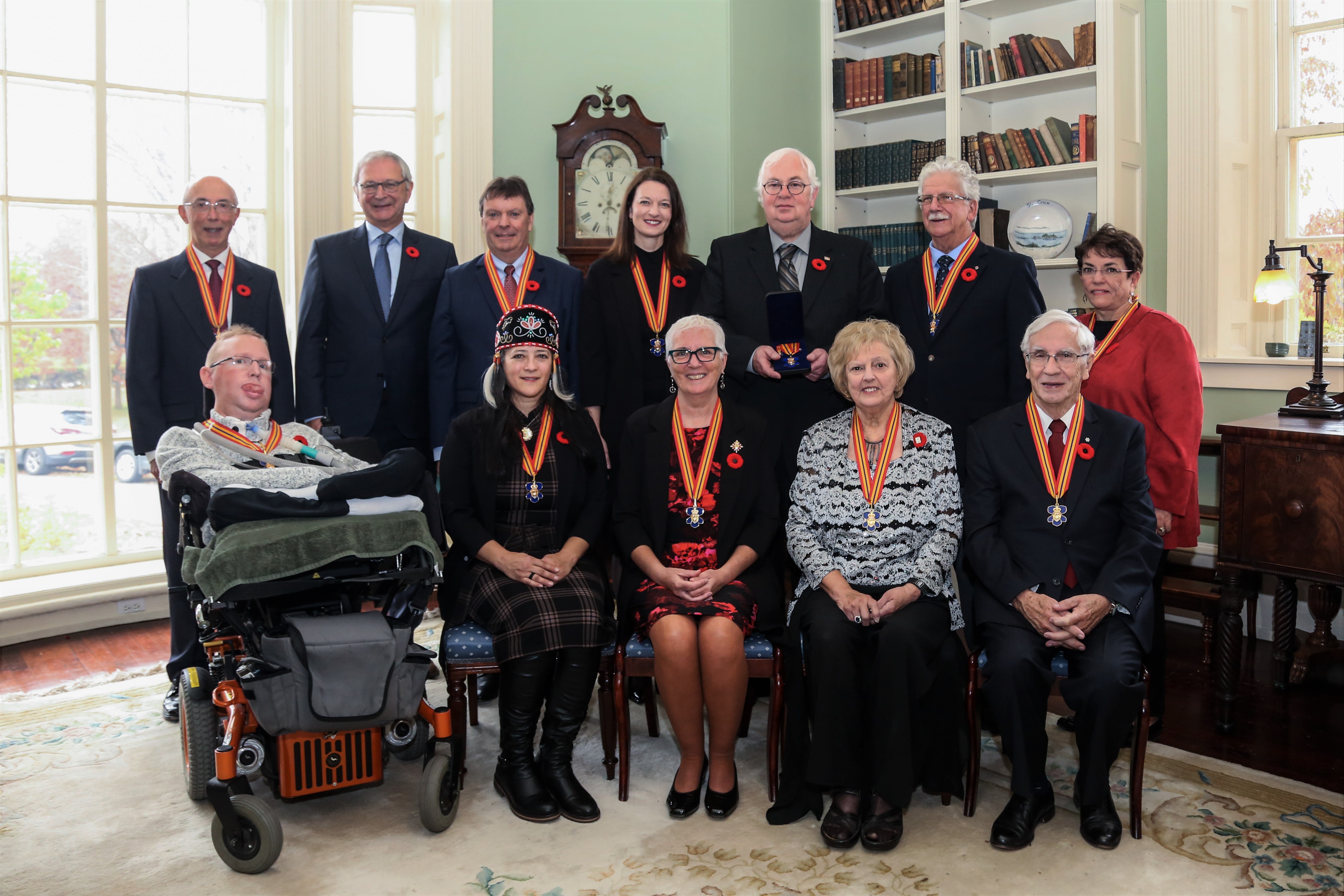