JULY 4, 2018 — One of the very interesting, but little-known, groups of invertebrate animals we have in our many New Brunswick streams and lakes is the freshwater mussel.

The naturalist community in New Brunswick does not pay much attention to this member of Mother Nature’s community. This is unfortunate, as there is a significant void in what we know about the 11 species recorded here and they are important contributors to the health of freshwater ecosystems.

For me personally, it was not until I heard Dwayne Sabine give presentations to naturalist groups that I realized just how fascinating these creatures really are, and how much I would like to be able to call them by name when finding their shells on the shorelines of lakes, rivers, and streams. Muskrats may be cattail root connoisseurs; however, they also have a taste for freshwater mussels. They satisfy this taste in a very interesting way. They gather mussels from their underwater habitat, bringing them to shore and placing them in “piles” called middens. When out of the water for a time, the mussels are weakened and their shells will partially open. The muskrat then returns to feast on the interior body of the mussels, leaving the shells intact in a neat, easily located, pile where interested naturalists can gather them and identify them satisfying the curiosity that makes us naturalists.

This is a typical muskrat “midden” of mussel shells ready to examine for species identification.

There are only 10 kinds of mussels we are apt to find in New Brunswick (the 11th is extirpated). Some are fairly common, some much less frequently encountered, others rare in New Brunswick in light of present knowledge, and some now of special conservation concern here. With only 10 freshwater mussel species to deal with, it is no more difficult to get to know the species by name and to identify them than, say, the skipper butterflies of New Brunswick, for which we have ample good guides to help us with.

It may have taken a moment to get here, but the real reason for this essay is to review and introduce the New Brunswick naturalist to a new user-friendly guide to the mussels of New Brunswick.

Up until now, the guidebook of choice to learn about our mussel community has been The Freshwater Mussels of Maine by Nedeau, McCollough, and Schwartz  (2000 edition). This 118 page guide book is still the main source of choice (early printings needed an error corrected on page 82). Unfortunately, it is not a convenient guide to carry in the field.

Maritime naturalists engaged in mussel surveys are now in luck as a field friendly, concise, 26 page, pocket-sized, guide is available free of charge as of 2018. It is entitled Freshwater Mussels of Maritime Canada by Donald McAlpine, Mary Sollows, Jacqueline Madill, and Andre Martel. The project grew out of a series of Department of Fisheries and Oceans sponsored freshwater mussel workshops presented by the New Brunswick Museum for Indigenous groups gearing up to add freshwater mussel surveys to fish surveys they were already engaged in. 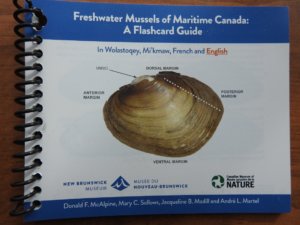 Above is a photo of the Flashcard Guide. (I had by copy coil bound for convenience.)

This guide is available in English, French, Wolastoqey, and Mi’kmaw, and is perhaps a New Brunswick first for a multilingual publication. The guide comes as all four sets in a single ring and is printed on waterproof Tyvec. Users can mix and match the pages as they wish. While the impetus behind the whole effort was freshwater mussel conservation, the hope is that the project will also play a role in helping to conserve Maritime indigenous languages. The guide was produced jointly by the New Brunswick Museum and the Canadian Museum of Nature, with funding for production provided by Fisheries and Oceans.

Unfortunately, the print run was quite small (several hundred), so distribution of the hardcopy version is currently restricted to watershed groups actively engaged in mussel surveys. However, the electronic version can be freely downloaded. I’ve spent some time digesting the pages of this small gem realizing what a bonus it is to the Maine publication (which the inside cover states it’s designed to be used in conjunction with). However, there are two points in this guide I found to be problematic.

Nevertheless, this guide is an invaluable asset to watershed groups or others that may undertake freshwater mussel surveys in the region. If used in conjunction with the more comprehensive Freshwater Mussels of Maine and other supplement recommended, the problems above will not present issues. In any event, I am told that a further printing will take place soon and the two issues above will be addressed.

It is of interest that the Dwarf Wedgemussel, now extirpated, was known in Canada only in the Petitcodiac River watershed. After construction of the Petitcodiac River Causeway between Riverview and Moncton, this species disappeared. Could this guide lead to remnant specimens being located? That would be an exciting outcome!

The Eastern Pearlshell, which is very common in nearly all New Brunswick watersheds, is now endangered in Europe, where it was once very common. This species is one of the longest living invertebrates known, living up to 200 years. Sadly, collecting of this species in search of rarely present pearls has decimated populations in some parts of the world. Fortunately the “cultured” pearl industry has made this practice unnecessary. However, declines in water quality and loss of salmon populations, on which this mussel species is dependent, have also been significant factors in the species decline.

I’m looking forward to the start of the open water season so I can begin to peruse muskrat middens and roam streams with a 5 gallon plastic pail with the bottom replaced with a plexiglass plate. The latter allows for perfect viewing of the mussels in their underwater world. A copy of the guide, downloaded onto a phone, will probably be in my pack.

The electronic version of Freshwater Mussels of Maritime Canada can be downloaded for free at http://www.nbm-mnb.ca/images/stories/Freshwatermusselsguide.pdf. Also, a more technical paper, and one of the recommended supplements to the guide, Freshwater Mussels (Bivalvia:Margaritiferidae, Unionidae) of the Atlantic Maritime Ecozone, is also available as a free download at http://www.nbm-mnb.ca/images/stories/AMEChapter27Freshwatermussels.pdf