JULY 25, 2017 — Twenty-three students applied for the Mary Majka Scholarship this year. The Scholarship Committee met in early May to review and evaluate the applications and to determine the recipients of the awards. The Committee awarded a study scholarship to Lena Gallant of Wood Point (Sackville area), to Allison Pugh of Fredericton and to Zachary MacMillan of Riverview, each for an amount of $500.00.

Lena Gallant (missing from photos) graduated from Tantramar Regional High School in the spring of 2017 and started undergraduate studies in Science (Biology) at Acadia University in the fall. Her goal is to work as a wildlife biologist. Lena has enjoyed being an active student volunteer at the Tantramar Wetlands Center where she realized that biology and environmental science appealed as career choices. 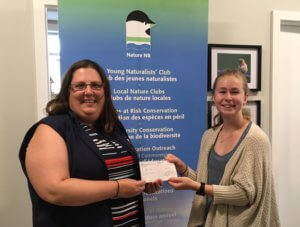 Allison Pugh has always loved nature and was described by one of her teachers at Fredericton High School as a leader by example and having made it “cool” for students to wear hip waders and dig in the bottom of a brook with bare hands. Allison graduated in June and moved on to UNB in Fredericton where she will pursue a Bachelor of Environmental Sciences and Natural Resources. 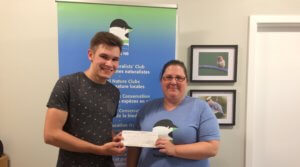 Zachary MacMillan spent summers at a family cottage near the ocean and developed a strong passion for the sea. He graduated this spring from Riverview High School and in September entered the Science program at Dalhousie University where he plans to study marine biology. His teacher describes him as being a natural leader with a love for nature, the sciences and the ocean.

Nature NB is proud to support Lena, Allison and Zachary in their studies and congratulates them on their accomplishments to date.

Donations to the Mary Majka Scholarship Fund can be made online or by cheque through the Nature NB office at 259 Brunswick Street, Fredericton, E3B 1G8. Information brochures are available online at the Nature NB website. Nature NB is a New Brunswick non-profit, charitable organization and charitable receipts are issued.

Please check your feed, the data was entered incorrectly.