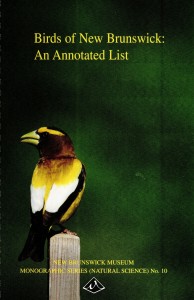 Birds of New Brunswick: An Annotated List was published in 2004 by the NB Museum and lists all bird species confirmed in the province up to that time – some 406 species. It describes their status (resident, migrant, visitor, etc.), relative abundance and frequency of occurrence as well as information on their geographical distribution in New Brunswick and their seasonal appearance. Nature NB, in collaboration with the NB Bird Records Committee* and the NB Museum, is making this list available at a very low cost to persons interested in the birds of New Brunswick.

This is an opportunity for people at every level of interest to own the most detailed source of information on New Brunswick birds. If you would like to purchase a copy ($5 per book), contact your local Naturalists’ club or contact Nature NB.

Since 2004, a number of new bird species have been documented in New Brunswick. The official bird list now stands at nearly 420 species, with some other potential “firsts” awaiting review by the Bird Records Committee. These recent additions and information about each are available in the addendum below, which will enable birders to keep their copy of the book up to date in future.

Since publication of Birds of New Brunswick: An Annotated List in 2004, the New Brunswick Bird Records Committee has accepted eleven additional species, mostly accidental visitors to the province:

Subsequent record(s) of species marked with an asterisk (*) are pending review.

Barnacle Goose*: Branta leucopsis (Bernache nonnette)
The origin of Barnacle Geese, a species kept routinely in captivity, is usually questionable. However, an immature bird associating with migrant Canada Geese at Coverdale, Albert Co., on Nov. 3-29, 2001 was accepted onto the provincial list in the category “natural occurrence questionable, but a reasonable possibility”. There has been some increase in reports of this goose in eastern North America, suggesting that weather conditions may sometimes favor arrival of migrants from increasing breeding populations in Greenland or Iceland.

Cackling Goose*: Branta hutchinsii (Bernache de Hutchins)
In the 45th Supplement to its Check-list of North American Birds, the A.O.U. recognized the small tundra-breeding races of Canada Geese as a separate species under the name Cackling Goose. The NBBRC has accepted two observations: one at Harvey, Albert Co., on Mar. 24, 1982, another at Pokemouche, Gloucester Co., from Oct. 4 into November, 2005.

Cory’s Shearwater*: Calonectris diomedea (Puffin cendré)
The BRC has accepted photo-documented observations of one at “The Prong,” in the Bay of Fundy, southeast of Grand Manan, on June 30, 2010, and of perhaps the same one at Machias Seal Island, the following day.

Swallow-tailed Kite: Elanoides forficatus (Milan à queue fourchue)
One was seen and photographed as it flew through the Hammond River area of Quispamsis on June 4, 2011.

Crested Caracara*: Caracara cheriway (Caracara du Nord)
A subadult was seen and photographed in Gloucester County, at Maltampec Oct. 23 and at Rivière-à-la-Truite Oct. 25-29, 2002.

Tufted Puffin: Fratercula cirrhata (Macareux huppé)
Far from its Pacific home, an adult was seen and photographed by numerous observers during an extended stay on and around Machias Seal Island from at least June 17 to July 14, 2014.

Townsend’s Warbler: Setophaga townsendi (Paruline de Townsend)
In the autumn of 2005, two of these western warblers appeared in the province and were seen and photographed by numerous observers. The first one was on wooded slopes near the swimming pool in Fundy National Park Nov. 4-11, and the other at bird feeders in Gondola Point, Quispamsis, from Nov. 27 to Dec. 11.