1900 – Christmas Day 1900 was when the Christmas Bird Count (CBC) started. Most counts were in New England or a bit further south, some were in California and Florida, but two of the 29 counts were in Canada. William H. Moore, of Scotch Lake, York County, New Brunswick was out of his house counting birds a few hours ahead of E. Fannie Jones in Toronto to become Canada‘s first Christmas Bird Counter. William H. Moore was a nature writer and educator for 40 more years but he never participated in another Christmas Bird Count. His house, around where he did his count, is still in good shape today and is close to the centre of today’s Mactaquac count circle.

1902 – The third CBC in Canada, and the only one in 1902, was undertaken by John MacSwain. He walked around Charlottetown for three hours in freezing temperatures, clear skies, and light wind, reporting, “Not a single bird seen.” He remarked that, “Early and severe weather in early December seems to have driven all birds to the south”. No wonder it was almost 60 years before there was another count on Prince Edward Island. 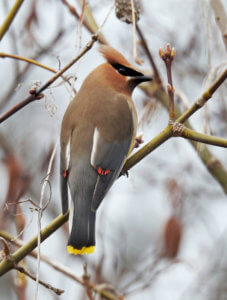 1903-1923 – There are no known New Brunswick counts from this time period. Across Canada though – in Toronto, but also in communities like Yorkton, SK, Penticton, BC, Edmonton, AB, and Brandon, MB – Canada’s long CBC history was starting. A few towns in Nova Scotia did counts and Quebec did a dozen as well.

1924 – The second New Brunswick CBC wasn’t quite compliant with the framework for a CBC, but the Canadian Field-Naturalist deemed it of sufficient interest to publish it at the end of its other counts, there being only nine others that year: six in Ontario and three in BC. The New Brunswick count was done by J. S. Lord travelling “30 miles by automobile and 7 miles by motorboat” to get from St. Stephen to Deer Island on December 24 and back again on December 26. His numbers were not very precise – “Black Duck, several…Herring Gull, hundreds… and Robins, 500” but he saw many birds including four species of owl. James Lord was from Deer Island, but had an insurance business in St Stephen. Some of his nature collections – in particular, birds’ eggs – are at the New Brunswick Museum today.

1925-1936 – Across Canada, the CBC grew slowly, reaching 21 counts by 1935. Nova Scotia did the only two counts in the Maritimes that decade, but in the late 1920s, there were four counts in presentday Nunavut. 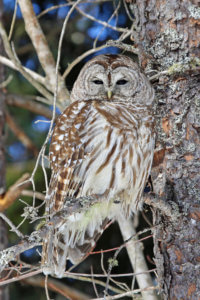 1937 – At one point, it seemed as though there were two CBCs in New Brunswick in 1937; but were there? Bird-Lore, the publication of Audubon at the time, details a count on “Kent’s Island” (Kent Island), a 200-acre island south of Grand Manan. The count was done by three people from Bowdoin College in Maine: not too surprising, as the island had been donated to the college by the Rockefeller family a year earlier. They travelled by boat from Lubec, Maine to do the count, sighting “many Dovekies” during the boat trip and eight Acadian (now Boreal) Chickadees on the island. The Audubon database also has a 1937 count at Blacks Harbour. It is less detailed, indicating only that it was done by three individuals; but, it has exactly the same list of species and numbers as the Kent Island count. It seems there was just one count: the one at Kent Island.

1945 and 1946 – Dr. Austin Squires from the New Brunswick Museum did counts covering the area within half a mile of the museum in Saint John, finding about a thousand birds from 7-10 species, each year. Dr. Squires was likely gearing up to organize the CBC more extensively in New Brunswick, something he undertook a few years after this.

1948 – There were two New Brunswick counts done in 1948. On Boxing Day 1948, Joan and George Boyer walked 30 miles (15 each, presumably) around Woodstock sighting, among other species, 7 “Brown-capped Chickadees (Acadian)”. On New Years Day 1949, Joan and George walked a further 35 miles plus travelled 40 by car to cover the Sackville area, finding 16 more “Acadian Chickadees”.

Who were Joan and George? Well, George was from Woodstock, and they were probably visiting his family for Christmas and, like many of us, walked off Christmas dinner with a Boxing Day bird count. By New Year’s they were at their home in Sackville where George was working as a biologist with the Dominion Wildlife Service, known as the Canadian Wildlife Service after 1950. George was a UNB forestry graduate, but had been in the Canadian Army during WWII. Joan was from England, coming to Canada as a War Bride after WWII. They were later based in Ottawa with George doing work on waterfowl species around James Bay. (Thanks to Tony Erskine for some of this biographical information.)

1949 – In Memramcook, a single observer was out for five and a half hours on January 2, 1950, finding 500 birds from 18 species including 15 Gray Partridge, an introduced species not seen recently in the province (as far as I am aware)

If you know who conducted this count, please let us know at [email protected] ! 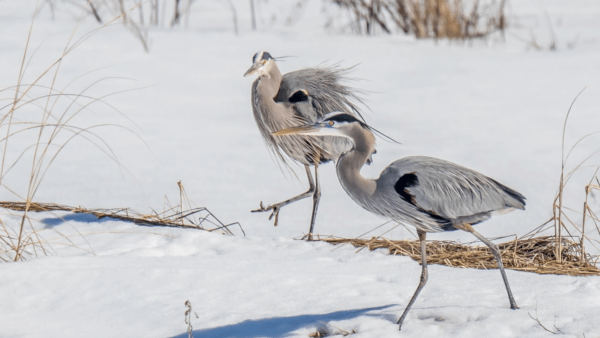 1950 – St. John’s, NL did their first Christmas Bird Count in 1950, organized by the Newfoundland Natural History Society, in the year after Newfoundland joined Canada.

The second area in NL to be counted was Badger in central NL. Henrik Deichmann, a New Brunswicker who was working at a pulp mill there, was the compiler for a count in 1959. Henrik was later the Chief Naturalist at Fundy National Park and was also the second President of Nature NB. Records show that he had previously participated in the 1956 count in Fredericton, the first New Brunswick count of the “modern era”.

1952 – Twelve members of the UNB Biology Club undertook a Christmas Count around Fredericton.

1956 – In the December 1956 issue of Nature News, Dr. Austin Squires, Curator at the New Brunswick Museum and publisher of Nature News, attempted to rally New Brunswickers to do a one-day bird census in their communities, staying within a 15-mile diameter circle and doing the census between December 22 and January 1. He said there would be a Saint John count centred on the museum for those who registered at the museum. A census form which “lists practically all birds which can be found here in winter” was apparently included in the issue, but does not seem to be in existence today. I wonder how many of the 130 or so species seen during most CBC periods these days were on it?

Response to Austin’s appeal seems to have been limited – the January 1957 issue of Nature News indicates that he went to Fredericton and did the count there with six other observers. There is no record of the Saint John count that he advertised. Canadian Field-Naturalist, however, published a count from Riverview Heights. New Brunswick held and recorded at least two counts in 1956, and has never had fewer counts since. 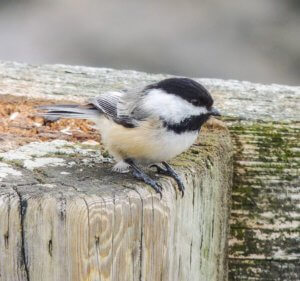 1957-1969 – The number of counts in the province grew slowly through the 60s. By 1969, 23 different count areas had been surveyed, although no more than 16 in any given year. Fredericton may have still been recovering from the euphoria of being the first to do a modern-era count and didn’t do one in 1957 – but has not missed a year since. Saint John and Moncton are the other two count areas that have had continuous counts since 1957. Other counts in the early 60s were mainly in an arc from Woodstock to Sackville, but Bathurst had a count for three years and both Lameque and Grand Manan – the northeast and southwest corners of New Brunswick – started their long-term CBC participation in the early 60s. Coverage across the province was increasing.

1969-2019 – Nature News, a publication of the New Brunswick Museum, morphed into the NB Naturalist in 1969 and continued Dr. Austin Squires’ project of publishing a provincial summary of Christmas Bird Counts every year. By 1999, New Brunswick had been averaging 45 counts per year for a decade and, other than the central regions, the province was pretty well covered. Even though long-term counts are sometimes halted or miss a year, new ones arise and we are now steady at about 50 counts per year.

Participate in a Christmas Bird Count in your region!