October 8, 2020 — Monarch Butterfly conservation has been a focus of Nature NB’s for many years. Thanks to funding from the NB Environmental Trust Fund, the NB Wildlife Trust Fund, Environment and Climate Change Canada, and support from volunteers with the Southern New Brunswick Monarch Watchers as well as the Saint John Naturalist’s Club, the organization has been able to distribute Swamp Milkweed seeds, participate in Monarch Butterfly surveys, and offer education to the public and in schools.

Thanks to the citizen science platform iNaturalist, our members — along with many New Brunswickers — have been adding their Monarch Butterfly observations to our ongoing monitoring project. They’ve also logged wild and cultivated Milkweed, both the Common and Swamp varieties.

While the data from the project is not representative of the eastern Monarch population as a whole, it has provided an interesting illustration of where our members are planting Milkweed, finding butterflies, and rearing caterpillars. 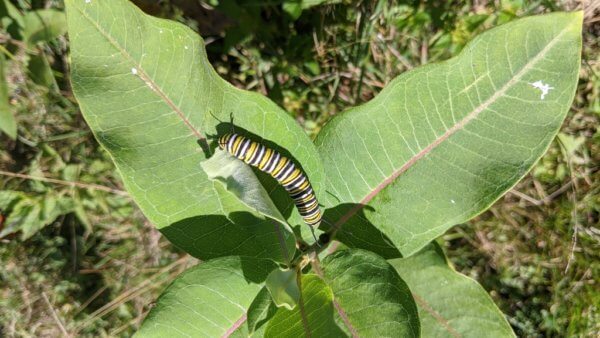 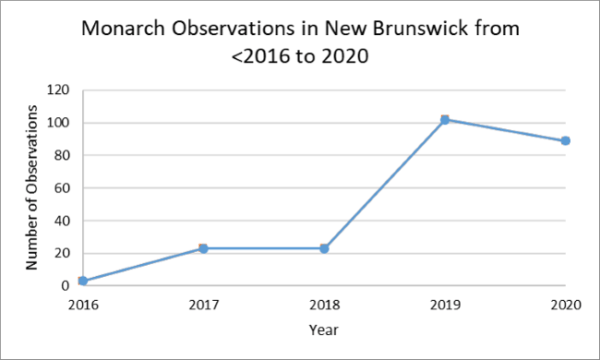 In the years leading up to and including 2016, there were 3 monarch observations in NB all observed in 2012 with 2 observations in Charlotte County and one in Kent County.

In 2017, the number of observations increased to 23 across New Brunswick, over half of which were observed in Albert County. The other 9 were dispersed in Charlotte (2), Queens (1), Sunbury (3), Westmorland (2), and York (1) Counties.

In 2018, there were again 23 monarch observations across New Brunswick, this time fairly evenly dispersed between the southern counties, excluding Sunbury and Queens.

In 2019, there was a significant increase in observations with 102 monarchs observed and recorded. All counties had sightings except 4 northern counties: Victoria, Madawaska, Restigouche, and Gloucester.

In 2020, 89 monarchs were observed across New Brunswick, except in the 5 northernmost counties (Victoria, Madawaska, Restigouche, Gloucester, and Northumberland). 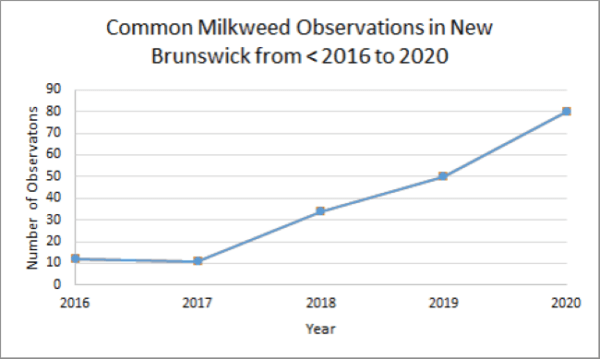 In the years leading up to and including 2016, there are 12 recorded observations of Common Milkweed in New Brunswick.

In 2019, Common Milkweed observations continue to rise with 50 recorded observations in the province. Once again, York County saw more than half of those with 30 observations (60%). The remaining 40% of the observations were dispersed among 5 southern counties and Victoria County (1).

Common Milkweed observations continue to increase in 2020 with 80 recorded observations. There were 46 observations in York County (58%), and 18 in Westmorland County (23%). The remaining 16 observations (20%) were dispersed across the province from East to West. 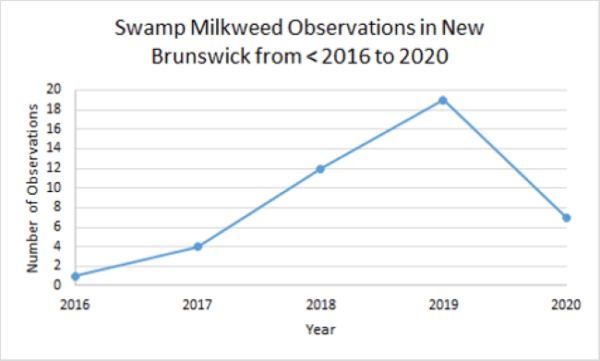 In the years leading up to and including 2016, there was only 1 observation of Swamp Milkweed in Charlotte County in 2011.

There were 12 observations in 2018 ranging from Victoria to Albert County (West to East).

In 2019, 19 Swamp Milkweed plants were observed in 6 counties. York county saw 9 (47%), Kings County saw 5, Sunbury had 2, and Kent, Queens, and Westmorland counties each had 1 recorded observation.

There was a decrease in observations in 2020 with only 7 total Swamp Milkweed observations recorded. 4 of those observations were in Sunbury County (57%), the others were in Kent (1), Kings (1), and York (1).

Location of observations in 2020 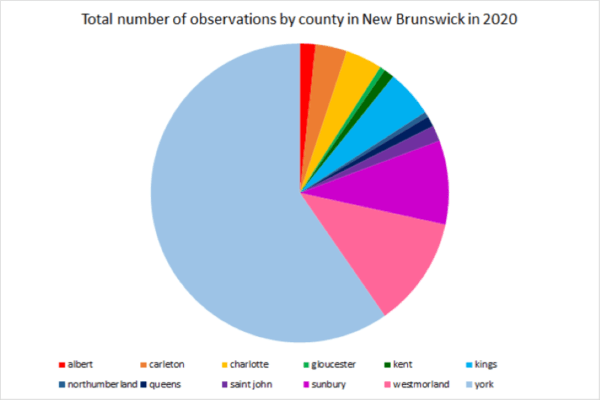 Observations over the years

Over the past 5+ years, observations on iNaturalist have increased, giving us an idea of where the iNaturalist participants have observed Monarchs and Milkweed. York County has seen a significant increase since 2017, and the southern NB counties have been consistent monitors for the Monarch and Milkweed populations. In the past year, Albert County has seen a decrease in observations, while most other counties have seen an increase. Two northwest counties had no contributing observations in the dataset: Madawaska and Restigouche. 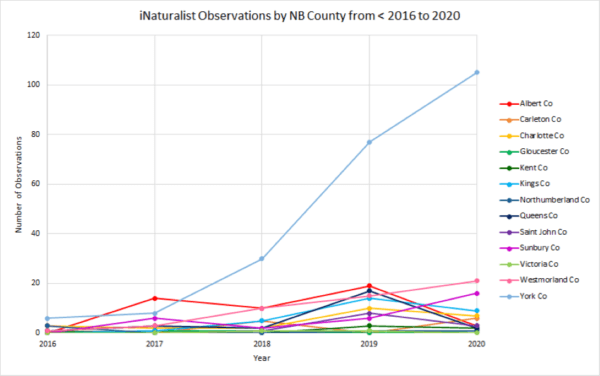 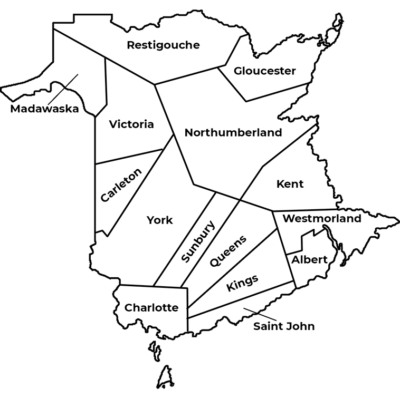 How you can help

Do you have Milkweed in your yard or neighbourhood that isn’t reflected in this data set? Did you snap a photo of a Monarch this summer? Do you want to help support our work in Monarch Butterfly conservation? Sign up for a free iNaturalist account!

All observations of Common Milkweed, Swamp Milkweed, and the Monarch Butterfly (in any life stage) is automatically added to our “Monarchs and Milkweed in New Brunswick” project, which will help us track observations for the years to come.