AUGUST 14, 2020 — In 2019, Nature NB joined environmental organisations across the Saint John region to contribute to Fisheries and Oceans Canada’s Oceans Protection Plan Coastal Environmental Baseline Program. The objectives of the program are to characterize the current state of the ecosystem; support evidence-based decisions to preserve marine ecosystems; and strengthen relationships between Indigenous nations, organizations, and local stakeholder groups. The projects involved range from mapping and ground-truthing fishermen’s knowledge of currents in the Bay of Fundy (Fundy North Fishermen’s Association), to surveying plankton assemblages and microplastics in the Saint John Harbour (Huntsman Marine Science Centre), to characterizing conserved, priority coastal and tidal wetlands around Saint John (Nature Conservancy of Canada). Along with the Nature Trust of New Brunswick, Nature NB has been conducting baseline waterbird surveys throughout the Port of Saint John region to contribute to the Coastal Environmental Baseline Program.

What is a Baseline Study?

A baseline study establishes the current state of interested variables for use in further evaluation of projects or changes in an environment; for example, it could be used to identify the current ecological state of a plot of land that is going to be reclaimed for forest, and would be used to compare the state of that same plot of land in the future to evaluate how effective the forest reclamation project was. Alternatively, you could conduct a baseline study of a natural habitat that is going to undergo development so that after the area has been developed you can identify how and what has changed from before the development. Without baseline data, you would not have any “before” to compare with your “after.”

Typically, baseline studies are conducted prior to any planned projects so that you can establish what has changed after the project is complete. However, baselines can also be used in cases where there are no current planned projects or changes to the system but there is a possibility or risk of change. This is the case in Saint John and other major port cities across Canada. On their own, this baseline data can characterize the current state of our environment, and then be used for assessing developments within the port city for environmental emergency responses or any other changes that may occur in the coming years. 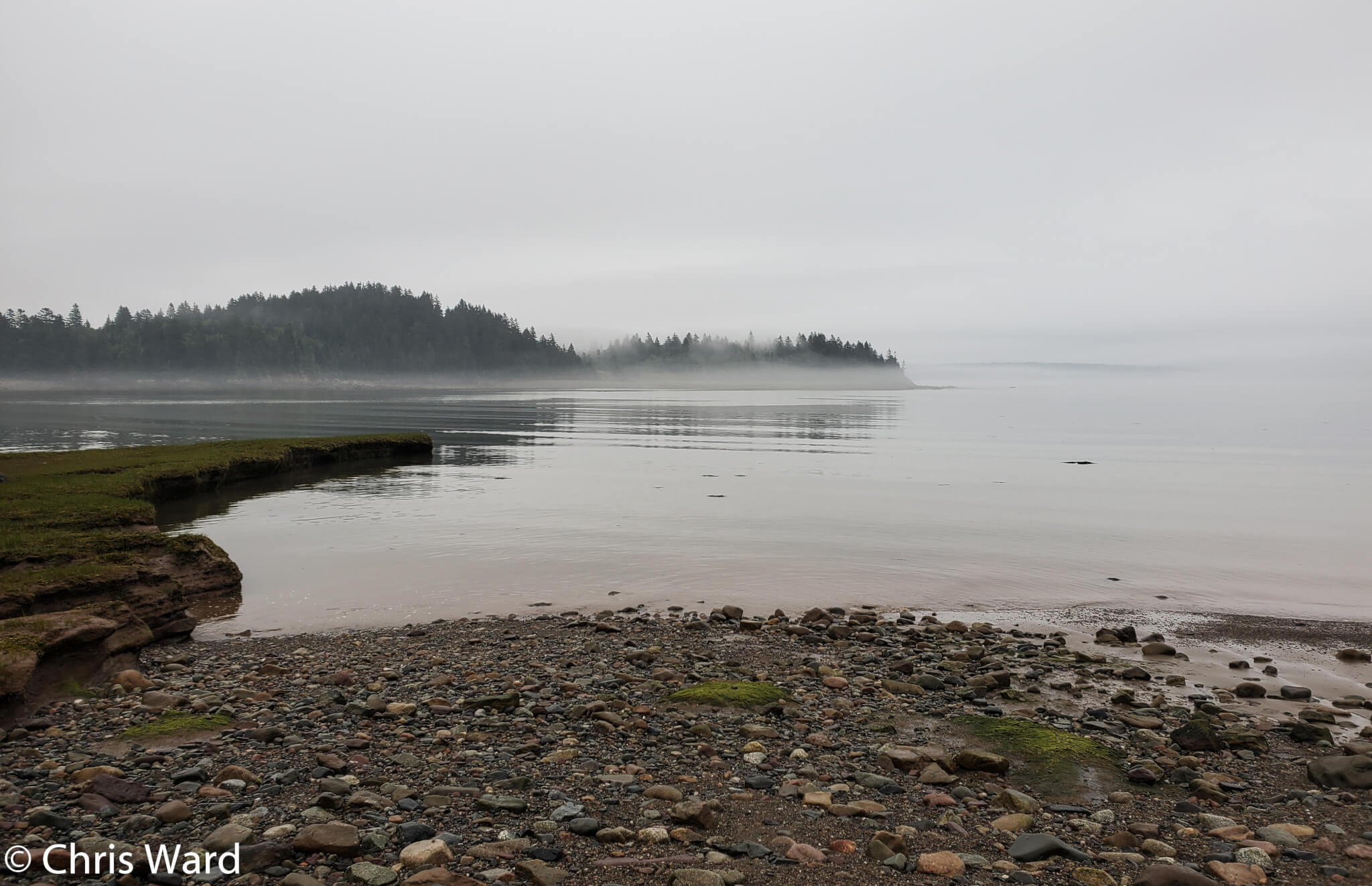 The Port of Saint John Study

For the Port of Saint John baseline study, Nature NB is conducting bird surveys throughout the Port of Saint John region. We selected twenty-eight coastal sites along the Bay of Fundy and along the Saint John River in a range of different coastal habitats from marshes (Red Head and Saints Rest) to rocky shores (Saints Rest and Bayshore beaches) and cliffs (Cape Spencer and Sheldon Point). Also included were sites in developed areas that have historically had high numbers of waterbirds, like Reversing Falls and both sides of the Courtenay Bay Causeway. We are conducting surveys during four major periods throughout the year: spring (April – May), summer (June – August), fall early migration (August – September) and winter (January – February). The bird counter records bird species during short, thirty-minute observation periods where the bird’s age, sex, location and general behaviours are recorded. Together, these data not only describe what species are present at these sites, but if they are younger or older birds, what general habitat they’re associating with within the survey area, and what they’re doing in that habitat. 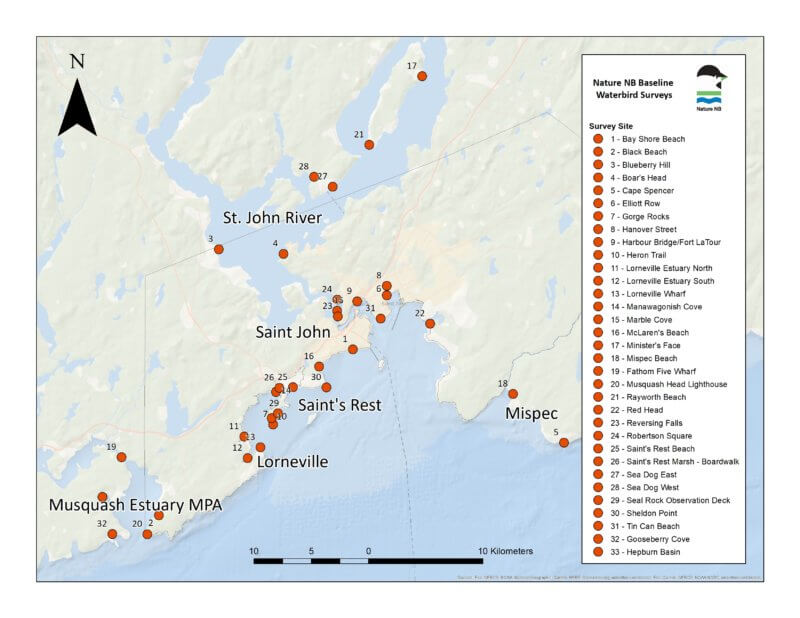 Even though we aren’t looking for anything in particular with this data, it’s still interesting to see what we’ve found after a year of surveys. Saint John is home to a wonderful diversity of water birds – surveys found representatives from most waterbird families: gulls, waders, plovers, sandpipers, sea ducks, dabblers, diving ducks, and even alcids! In addition to the diversity of birds, the surveys have also noted behaviours of some species, especially those nesting in and around Saint John. Manawagonish, Crow, Middle and Goat Islands are all occupied by Great Black-backed Gulls during the breeding season, and Manawagonish Island is among the three largest breeding colonies of Double-crested Cormorants in the Maritimes. This means that during the breeding season for both these species, an explosion of Great Black-backed Gulls and Cormorants are seen wherever there is an abundance of food. There’s no better concentration of food for these birds in Saint John than Reversing Falls and on some days during the summer, we observed hundreds of gulls and cormorants feeding at Reversing Falls. Even more, we consistently saw a large number of gulls and cormorants flying between Manawagonish and Reversing Falls at sites in between these locations, suggesting that at least in the Saint John region, Reversing Falls is a well-used location for nesting Cormorants and Gulls in the region.

The most enjoyable experience conducting these surveys year-round is witnessing the changes in species diversity and abundances during each season. During the late winter and early spring, mergansers and sea ducks are present in large numbers, displaying and chasing before they head to their breeding home ranges. Spring beckons the return of cormorants and shorebirds, with the former staying to breed for the summer and the latter moving on to the Arctic to complete their yearly migration. The summer is full of local breeding birds, including American Black Ducks, Double Crested Cormorants, and Herring, Great Black-backed, and Ring-Billed gulls. Change at the end of summer is ushered by the returning shorebirds, of which many, after only a short couple of months in the Arctic, are beginning their long journey back to South America. Finally, the late fall and winter offer up many birds you can’t often see at other times of the year: diving ducks, like Goldeneye, Long-Tailed Ducks, and adorable Buffleheads; northern gulls, like the Iceland Gull and Glaucous Gull; and sea ducks, like the Surf Scoter, which can be seen with their powerful bills in rafts offshore. Conducting these surveys has reminded us that remarkable wildlife is right on our doorstep in Saint John all year round. 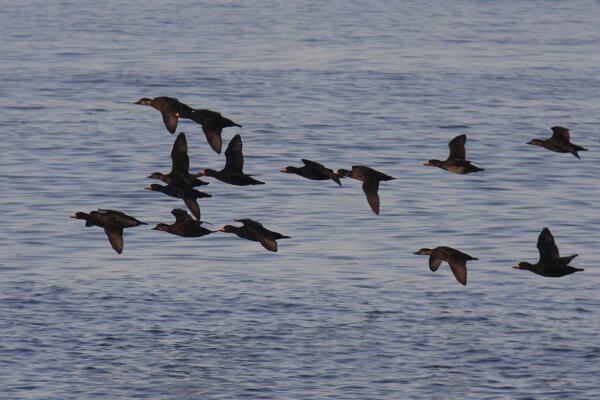 Data gathered by all partners conducting baseline projects across Canada will submit their data to a repository managed by the St. Lawrence Global Observatory and should be available to the public after the project is complete in 2021. For now, surveys are on pause until restrictions for public use lift, but are planned to continue until April 2021 for a second year of surveying once we are able to return to sites. Now that the survey protocol and locations have been set, anyone interested in participating in surveys are encouraged to contact either Adam Cheeseman or Chris Ward.