NOVEMBER 5, 2019 — Over 300 bird species call New Brunswick home. Some of them may only spend part of the year here, but all of them rely on the natural environment of this province to survive. The greater bird population is not without its challenges, having lost nearly 3 billion birds in North America since 1970 (CBC 2019). Enter Lewnanny Richardson, Nature NB’s Species at Risk Program Director, whose days are dedicated to making life better for birds on the Acadian Peninsula and beyond.

Richardson’s year is structured around the many different bird counts and surveys that take place from month to month. Beginning in April, Richardson — later joined by his summer students — visits the 33 beaches in the area where Piping Plovers are known to nest. Every year, plovers will nest on about 18 to 20 of those beaches, so Richardson and his team need to walk all 125 km of the 33 beaches to look for nests; that’s about 200 km in total. 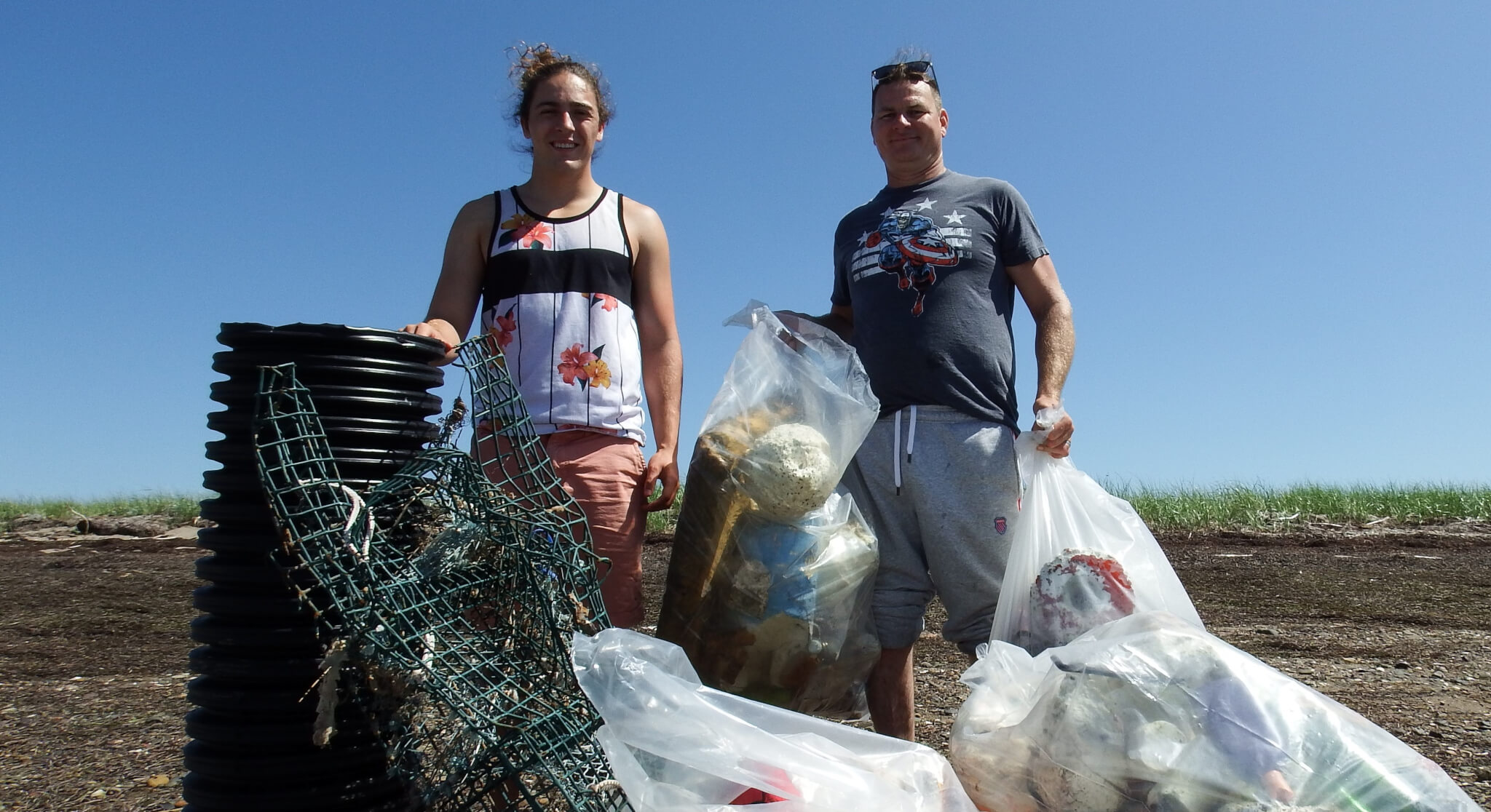 Photo: Chiasson and Richardson clean up a beach.

“After a long winter, it’s a painful walk,” says Richardson, laughing. “And every year it’s getting worse as I’m getting older. But after a week or so, it’s the university students who can’t keep up with me!” 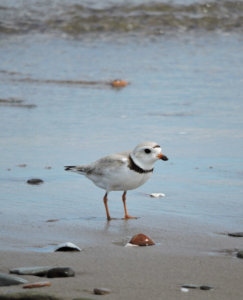 The area that falls within Richardson’s purview begins in Neguac, stretches up to Miscou Island, and then back along the northern coast to Maisonnette. This coastline encompasses eight Important Bird and Biodiversity Areas where Richardson has long been involved with bird surveys and population monitoring, especially for the Piping Plover. Twenty years ago, Richardson says that you could find approximately 75 nesting pairs along that stretch of coastline, but in 2019, the number of nesting pairs in the same area was down to 45. There are a number of reasons for this decline, but Richardson cites climate change and human activity as two of the main factors, effects which he is hoping will be mitigated by his work.

Coastline monitoring continues into May, preparing for the index count that Richardson participates in every year in early June. During this time, he and his team return to the Piping Plover nesting areas that were previously noted to check for eggs. This helps them identify active nesting areas to make recommendations for signage and other public education tools. Once summer hits field season is in full swing, and so is another one of Richardson’s projects: beach clean-ups.

On every beach visit, Richardson and his team take trash bags with them to collect the litter that they find as they go. They also host special beach clean-up events in which community members can participate. In 2019, Richardson, his team, and 67 volunteers cleaned up: 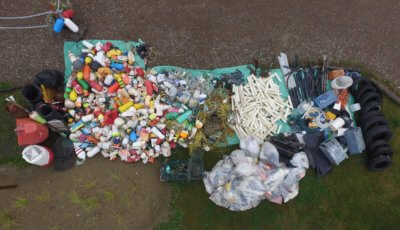 In the past, trash was taken to the landfill throughout the year as it was collected, but in 2019, Richardson stored up the bags so that they could be put on display in front of Brasseux d’la Côte, a brewery that Nature NB partnered with this year. After reading a Nature NB pamphlet about Marram grass, staff at the brewery decided to name their new witbier Barram to raise funds and awareness about dune ecology. For each can sold, Nature NB receives 10¢ that goes toward Richardson’s work along the coast. As part of that awareness campaign, the pile of trash in front of the brewery served as an important reminder of the impact of littering and illegal dumping on our beaches (see photo – click to expand).

As nesting season begins to wane over the summer, Richardson participates in impact studies in areas where dredging occurs, and is involved in monitoring the Gulf of St. Lawrence Aster, a rare species that only grows in a few known locations in New Brunswick. New in 2019, Richardson has also been more involved with North Atlantic Right Whale necropsies, surveying proposed burial areas to ensure that no shorebird nests will be disturbed.

Come autumn, Richardson is operating as a team of one once more. There are still bird counts and surveys into September and October, but with the new season comes the chance for Richardson to reflect on and report on the work that was done all summer. It also means that there’s time to log species on iNaturalist and eBird, and in 2019, Richardson had plenty to catalogue, with over 700 observations uploaded to iNaturalist alone, representing 130 species observed just in the Acadian Peninsula. In fact, Richardson is one of the highest-ranked observers in New Brunswick on the site, a statistic which he will eagerly share with a smile on his face. In 2019, Richardson — with the help of his daughters — also made the leap into social media, and people can keep an eye on his work via Instagram at @lewnanny.

The relatively slower pace of autumn and winter means that Richardson is able to conduct more community outreach. He hosts workshops where people can learn about building boxes for bird species such as Tree Swallows, American Robins, orioles, and woodpeckers, as well as bats. He also makes school visits where he presents to classes about Piping Plover conservation and the importance of keeping trash off our beaches. The off-season is also when many conferences and meetings are held, giving conservation groups in New Brunswick and across the region a chance to regroup and discuss their priorities and projects for the following year. Then, with the end of winter comes spring, and the cycle begins again. 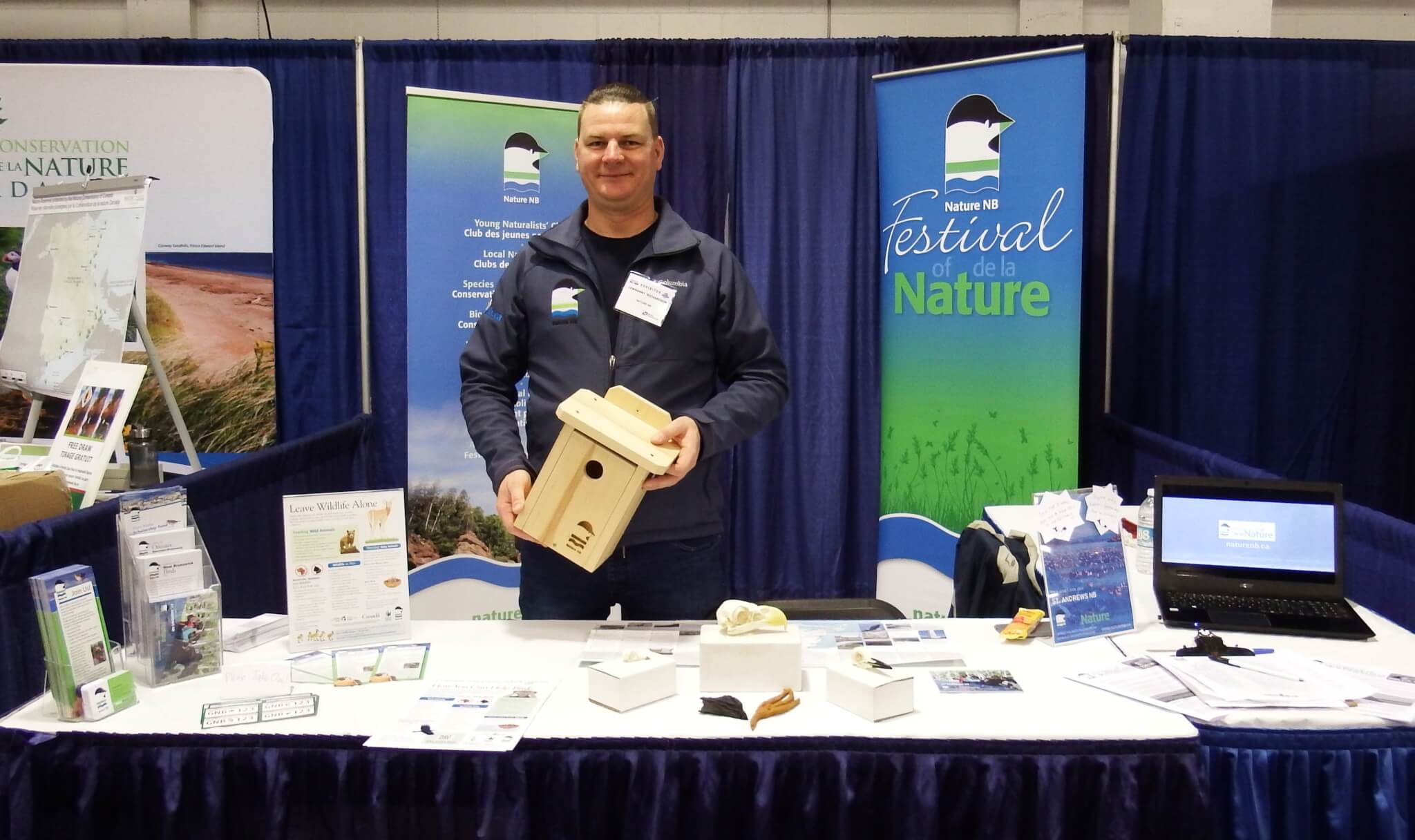 So that’s it; a year in the life of our Species at Risk Program Director Lewnanny Richardson. It’s a busy year full of the unique challenges that come with bird conservation. After all, like the proverbial canary in the coal mine, birds are environmental indicators, acting as a barometer for the health of the natural world that surrounds us (Hill n.d.); and Richardson rises to meet those challenges with dedication and hardwork. So much of what Nature NB was able to accomplish in 2019 — from the thousands of pounds of trash removed from beaches to our partnership with Brasseux d’la Côte — would not have been possible without him. But Richardson doesn’t do it for the reward; he does it because it matters.

“If you ask me what my work at Nature NB is… it’s my passion,” says Richardson. “I always have my coat with the Nature NB logo on it. I’m super proud of my work.”