“I was in awe,” said Sharp. “It’s like nothing I’d seen in New Brunswick yet.”

Sharp, along with Adam Cheeseman (Director of Conservation at Nature NB) attended a field trip to Caledonia Gorge organized by Nature Moncton on October 19, 2019. The event featured botanist Gart Bishop, geologist Mark Connell, and ornithologist Roger LeBlanc, who were on hand to share information about the many features of the natural area. The event attracted 17 participants, who spent the day on a ten-kilometer hike through the area, stopping along the way to observe flora and fauna, natural geological formations, and breath-taking views of the gorge. Sharp noted that the abundance of bird species in the area was a highlight for the group. During a single stop along the route, the group identified nine species that were perching and chirping in the trees above them: Black-Capped Chickadee, Red-Breasted Nuthatch, Golden-Crowned Kinglet, Common Raven, Red-Tailed Hawk, Downy Woodpecker, Hairy Woodpecker, Dark-Eyed Junco and Cedar Waxwing.

“It was a three-hour hike in, and a ten-minute hike out,” said Sharp, laughing.

“It’s like nothing I’d seen in New Brunswick yet.”

PNAs are legally-protected areas where the province’s natural heritage can be preserved. The areas may be habitats for vulnerable or rare species and their protection promotes biodiversity by limiting human impact (Natural Resources and Energy Development, Government of New Brunswick, n.d.). PNAs in New Brunswick are divided into two classes: 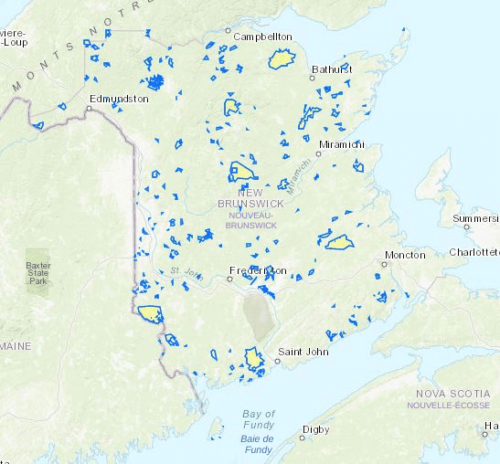 The Caledonia Gorge PNA is comprised of a type of forest called Acadian Forest, which is a unique mix of softwood and hardwood trees. This forest type is present across New Brunswick and into the surrounding provinces and states, and protection of this area is vital as only 5% of the original Acadian Forest remains (Village of Riverside-Albert, 2019). The area was first designated a Class 2 PNA in 2003 and was expanded in 2014 to its current size of 2,961.9 hectares, or over 7,300 acres, making it one of the largest PNAs in the province.

At the event, Sharp noted some distinct differences between being there and being in another area like a provincial park, for example. When you’re in a PNA, says Sharp, there’s a real sense of the importance of the place; of the legacy that the land will have. Knowing that the view you are seeing has been set aside so that it can remain the same for generations to come is incredibly moving. The lack of human interference is also noticeable; though some PNAs such as Caledonia Gorge have basic infrastructure like roads, you generally won’t find much more than that. Considering that these areas are set aside to preserve the intrinsic value of nature and not necessarily to serve as educational or recreational areas, that’s not a bad thing.

“Visiting PNAs connects you with NB in a different way,” says Sharp. “It makes me want to visit all the Protected Natural Areas in the province. There’s lots to explore… New Brunswick is a big province.” 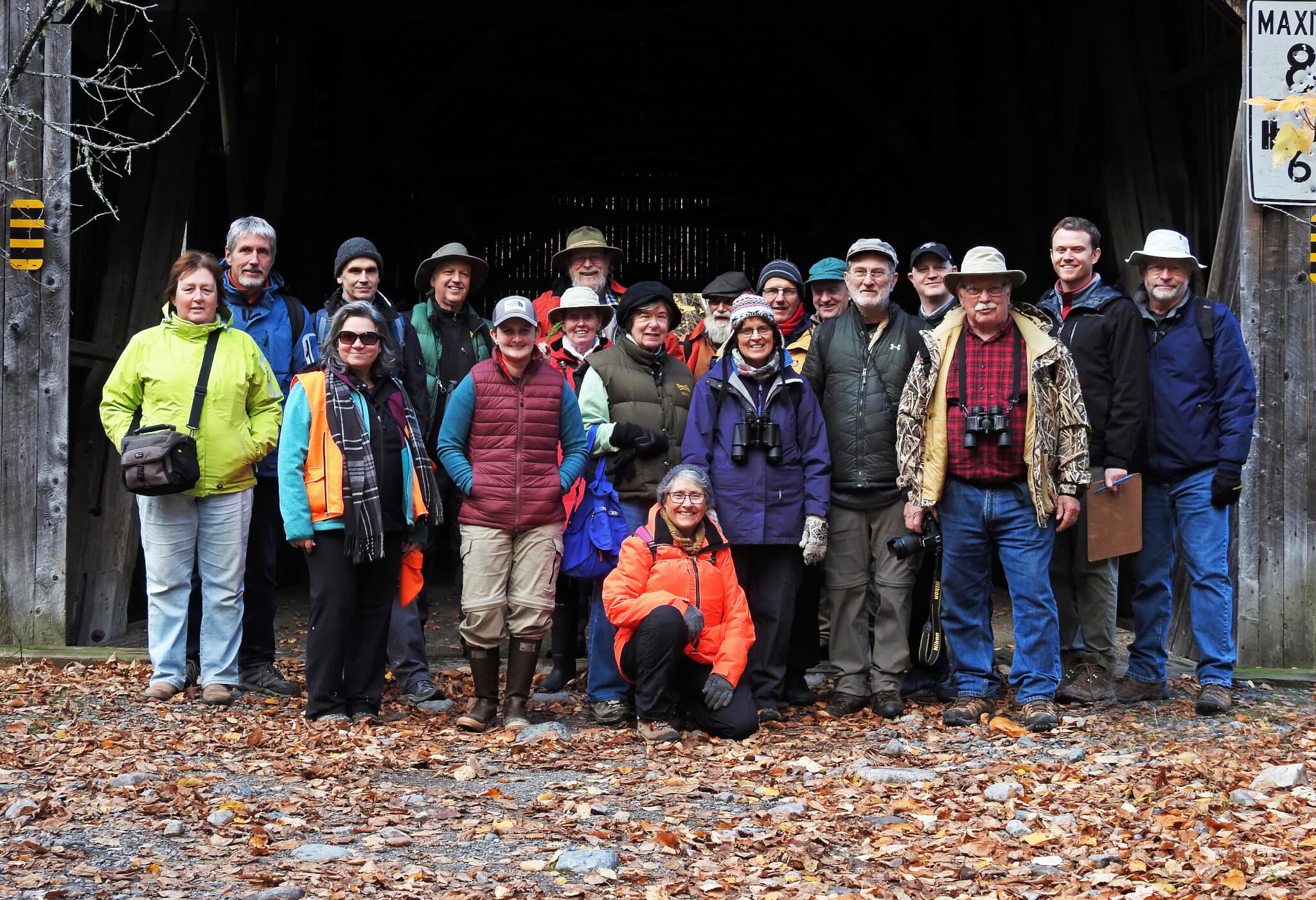 The field trip to Caledonia Gorge, in addition to being an excellent opportunity to enjoy nature, was also a chance for Nature NB to gauge the interest of participants in taking on a stewardship role for PNAs in the province. When PNAs were first designated in 2003, many of them had government-mandated stewardship groups who were responsible for monitoring these areas. However, after the stewardship program was cut, Nature NB saw an opportunity to take over that work by leveraging the support of our provincial network of naturalist groups.The Jacquet River Gorge PNA has been monitored by the Jacquet River Nature Club, and Caledonia Gorge is the next place where Nature NB is hoping to put a volunteer-led stewardship framework in place.

“Really the goal of this project is to go into the PNAs once or twice a year and just look out for things like damaged signs or places where people are dumping their garbage,” says Cheeseman. “We’re looking at the quality of the roads and culverts, and making sure that there’s connectivity for aquatic species and different things like that. So it’s all pretty basic stuff, but it’s really important work.”

In 2003 when PNAs were first established, local advisory committees were formed to oversee the process. Mike Lushington, past president of Nature NB, was the chairman of the Jacquet River Gorge PNA committee, and he has continued to work with naturalist groups and Nature NB to assist in the stewardship of these areas. Lushington elaborated on the responsibilities of stewarding a PNA for anyone interested in getting involved.

“In Jacquet River, we get in for an end-to-end survey twice a year,” explained Lushington. “We have no formal or legal role to enforce what we find, our role is strictly observation. I put together a little summary and send it to Adam, who can then follow up on what we observe.” 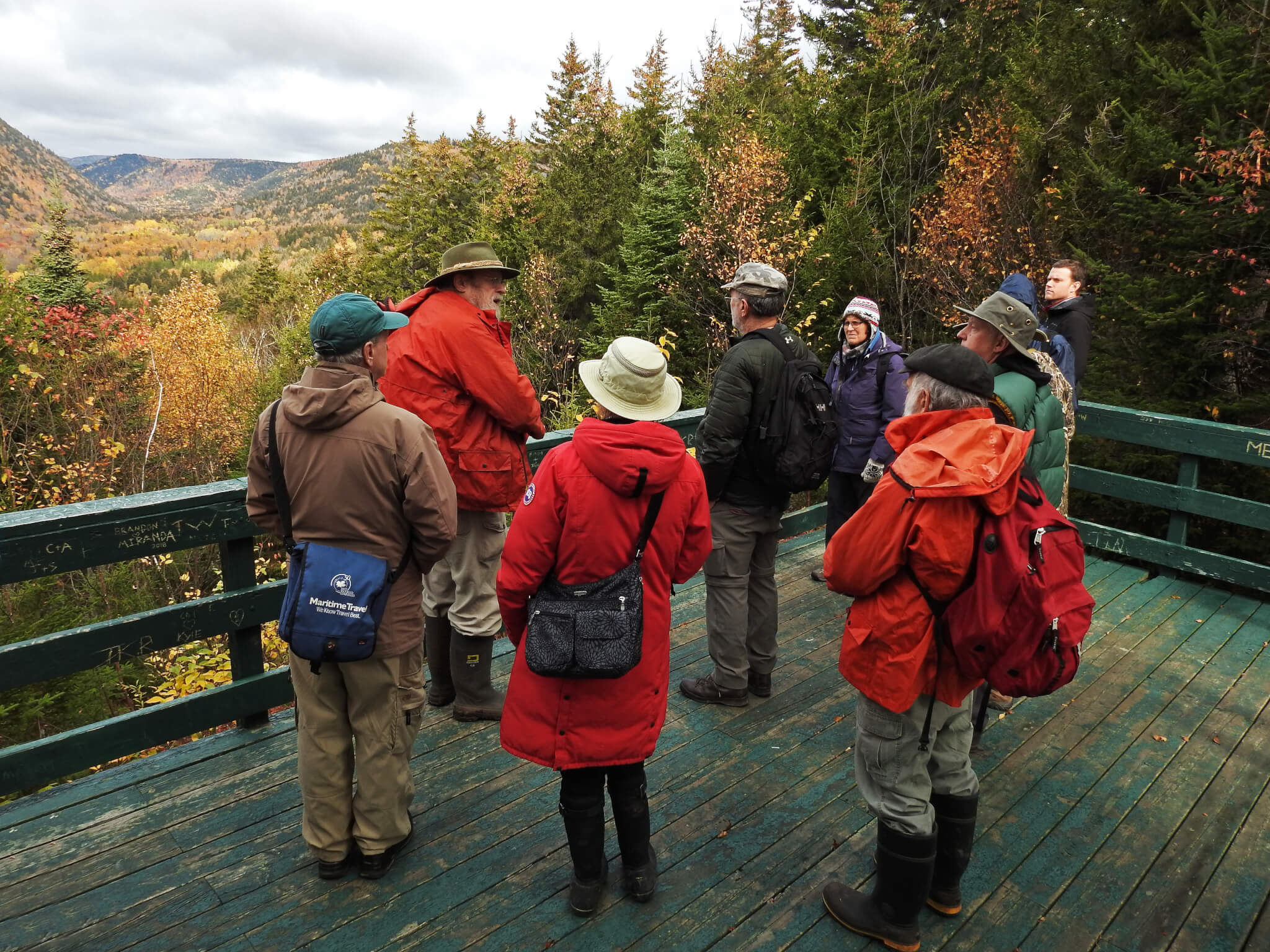 In addition to illegal dumping and damaged signs, stewards also look for signs of clear-cutting, signs of camping and recreational vehicle use, and anything else that seems out of place, such as an oil or tar leak. Lushington stressed that the stewardship role is flexible and may change from PNA to PNA; it comes down to the volunteers and how much of their time they are able to dedicate. For some, two visits a year may suffice, but for others such as Jacquet River Gorge, clubs may make several smaller field trips to the area throughout the year. During those field trips hosted by nature clubs, Cheeseman and Sharp are hoping to reach people who may not have gotten involved otherwise. Considering the fact that many of these PNAs are in remote areas and can be relatively difficult to access, it is their hope that local people who already spend time hiking, birding, or foraging in these areas will agree to take on the work and start to engage with these natural areas in an even more meaningful way.

“It’s a great way to educate yourself about the value of protected areas,” says Cheeseman. “When you cross that boundary into a PNA, you can notice immediately the difference, even if you’re not an environmental scientist or a biologist. You can tell the difference in the forest for example, or the landscape, or the different species that you see, or the tracks you see.”

“It’s a great way to educate yourself about the value of protected areas.”

“The areas exist to protect what’s there, not to exploit the land,” said Lushington, echoing Cheeseman’s statement. “People may notice that some of the smaller back roads or trails in the areas are deteriorating, but they’re not; they are reverting.”

It’s Cheeseman’s hope that New Brunswickers who feel frustrated with current forest management practices in the province will get on-board with the work and take their appreciation for our natural heritage to another level. No matter where your interest in conservation comes from — whether you’ve been a birder for 60 years, or you’re just beginning to engage with environmentalism — all volunteers receive training on what to look for when they go into a PNA. Evaluation and reporting templates are provided to help guide volunteers through the monitoring process, and as far as time commitments go, this one is extremely flexible, with a minimum of just two visits needed per year.

When asked if she’d recommend visiting a PNA, Sharp wasted no time, saying that she 100% recommends the experience to all who are able, and you may be surprised: like Sharp, you might discover a side of New Brunswick that you never knew existed.

If you’re interested in getting involved, contact Adam Cheeseman, Director of Conservation, at [email protected] or by phone at (506) 588-6539.

Want to know if there’s a PNA near you? The Government of New Brunswick maintains an interactive online map where you can see which PNAs are in your area.