OCTOBER 10, 2019 — In New Brunswick, monarch butterflies have always been part of the natural landscape. While many people have heard of the near-unbelievable migration that they embark on every year, the topic of conversation in recent years has been their steep decline in population.

But Jim Wilson, Bev England, and Janet Kempster from the Saint John Naturalists’ Club are working to change that conversation into one of hope.

The story of the monarch butterfly’s life cycle is an incredible one; our hero embarks on an ambitious journey far from home to discover what’s out there for them to experience. Along the way, their courage and stamina are tested. After facing a challenge or trial of some kind, they return back to their ancestral home, stronger thanks to what they’ve just endured. You may be thinking that this sounds more like the story of a protagonist from a sci-fi or fantasy novel, and that’s because this journey – the universal hero’s journey – is the monarch’s story, too.

While researchers have long been aware of the incredible monarch migration, the specifics of that migration remained a mystery. How could such a journey be possible? And what route does that journey follow? How do they know where to go? These were just some of the questions that were asked by Fred and Norah Urquhart, researchers from the University of Toronto, whose work would go on to form the basis for the organization Monarch Watch at the University of Kansas. One of Monarch Watch’s biggest undertakings? The monarch tagging project. 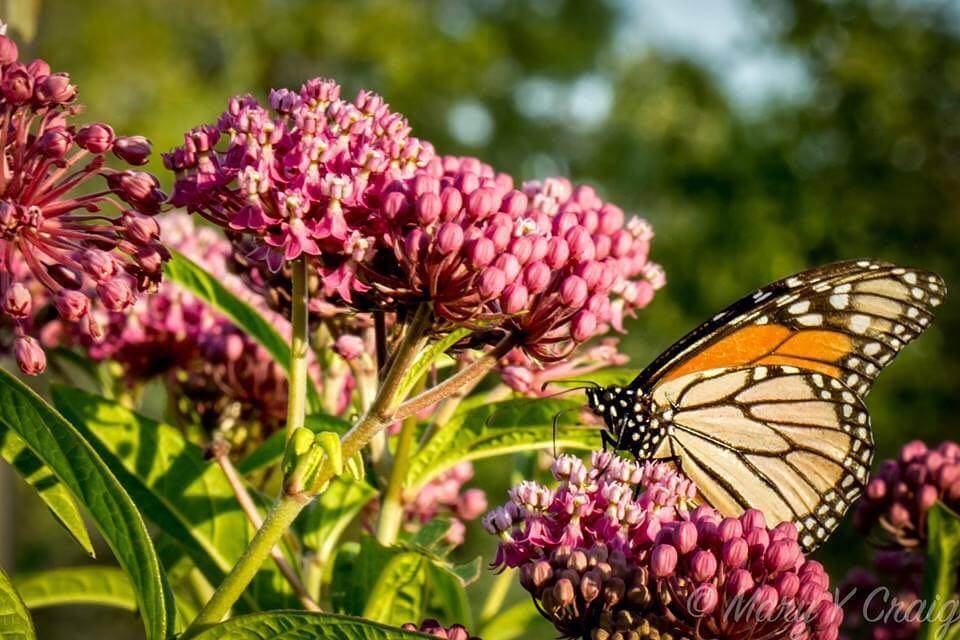 Wilson, a New Brunswick birder and naturalist who first heard about the project while on vacation in New Jersey in 2004, attended a monarch tagging workshop and learned not only how to tag a monarch, but also how he could get involved with the University of Kansas’ work. Having been involved with seabird migration observation at the Point LePreau Bird Observatory, he knew the perfect place to introduce the project in New Brunswick.

“And looking out at the seabirds, every once in a while we’d see a monarch butterfly fly past,” says Wilson. “And I got to thinking, gee, you know, I don’t see monarch butterflies like that anywhere else. So they were obviously migrating along the coast in the fall.”

“Gee, you know… I don’t see monarch butterflies like that anywhere else.”

Wilson started tagging in the province in 2006 after purchasing about 50 tags from Monarch Watch. That year, he was able to use all the tags he ordered, but in other years, hardly any monarchs were observed in the region at all. Factors that influence monarch survival include harsh weather conditions, clear-cutting, and the use of herbicides, among others. But despite those less successful years, anecdotal reports indicate that the population has been increasing steadily in New Brunswick, with 950 monarchs tagged in 2018, and a whopping 1,100 tagged in 2019. And just as the monarch population in the province seems to be expanding, interest in monarchs has increased sharply too, not only in the Saint John Naturalists’ Club, but among other groups as well.

“Monarchs became sexy,” says Wilson. “Fortunately, a lot of good attention was being focused on monarchs and it was better understood what the causes of the decline were. And generally speaking, a lot more interest started to happen all over the place. Monarch conservation recovery efforts were launched in Mexico, the US, and Canada. And so we started to tag in a more serious way.”

When asked to describe how you catch a monarch for tagging, Wilson, England, and Kempster started to chuckle.

“You take the net, and you do your darnedest,” says England, laughing. “Then you take the monarch out of the net with your tag at the ready. You have to sex the monarch – whether it’s male or female – and then tag it, and log it into the tracking sheet. And then you can release the monarch and it’ll go right back to nectaring.”

The tag is a small circular sticker, about the size of a pencil eraser. It displays a unique tracking number that can be logged in Monarch Watch’s central database by observers anywhere along the migration route. The tag is affixed to the monarch’s wing and is made from a special adhesive that doesn’t harm the butterfly. 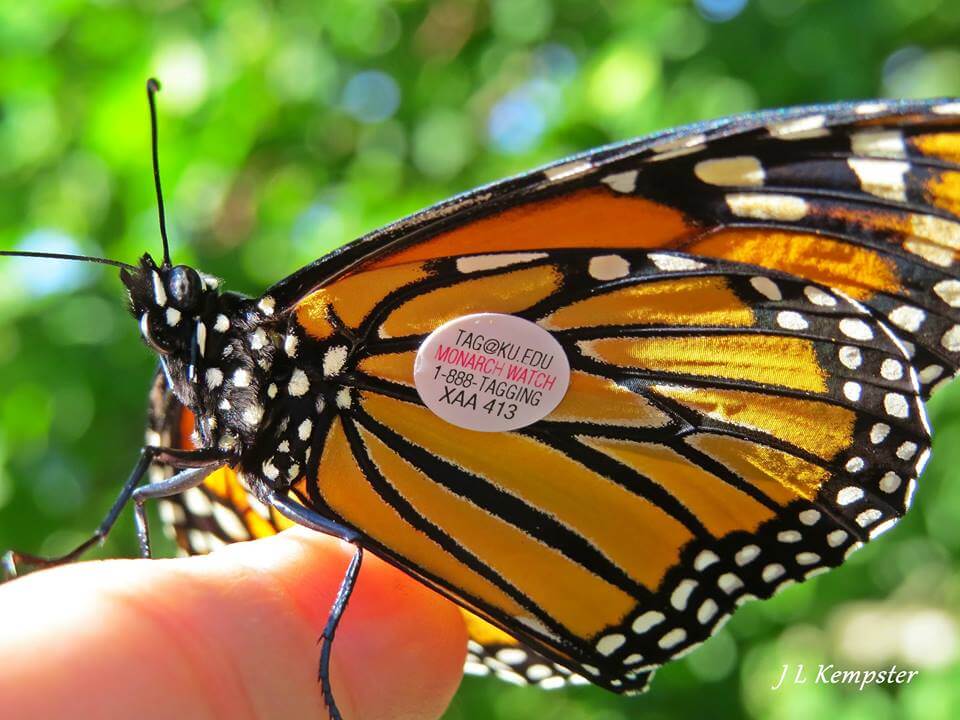 Tagging efforts have been able to grow even more thanks to staff at the Point LePreau Nuclear Generating Station. Originally partners with the club through the Point LePreau Bird Observatory, employees at the generating station became interested when the research work expanded to include butterflies. In addition to helping with tagging, employees have also done something to help monarchs at Point LePreau that almost anyone can do at their own home: planting milkweed.

There has been a push in the last few years to distribute seeds to encourage New Brunswickers to plant swamp milkweed in their gardens. Work has also been done to de-stigmatize milkweed, a plant whose common variety has earned a bad reputation over the years. Common milkweed grows from a rhyzomatic root system, which means it spreads rapidly due to a network of underground stems, but swamp milkweed doesn’t spread, making it a perfect plant for use in landscaping. And New Brunswickers have been taking advantage of the seeds with more and more milkweed popping up across the province. 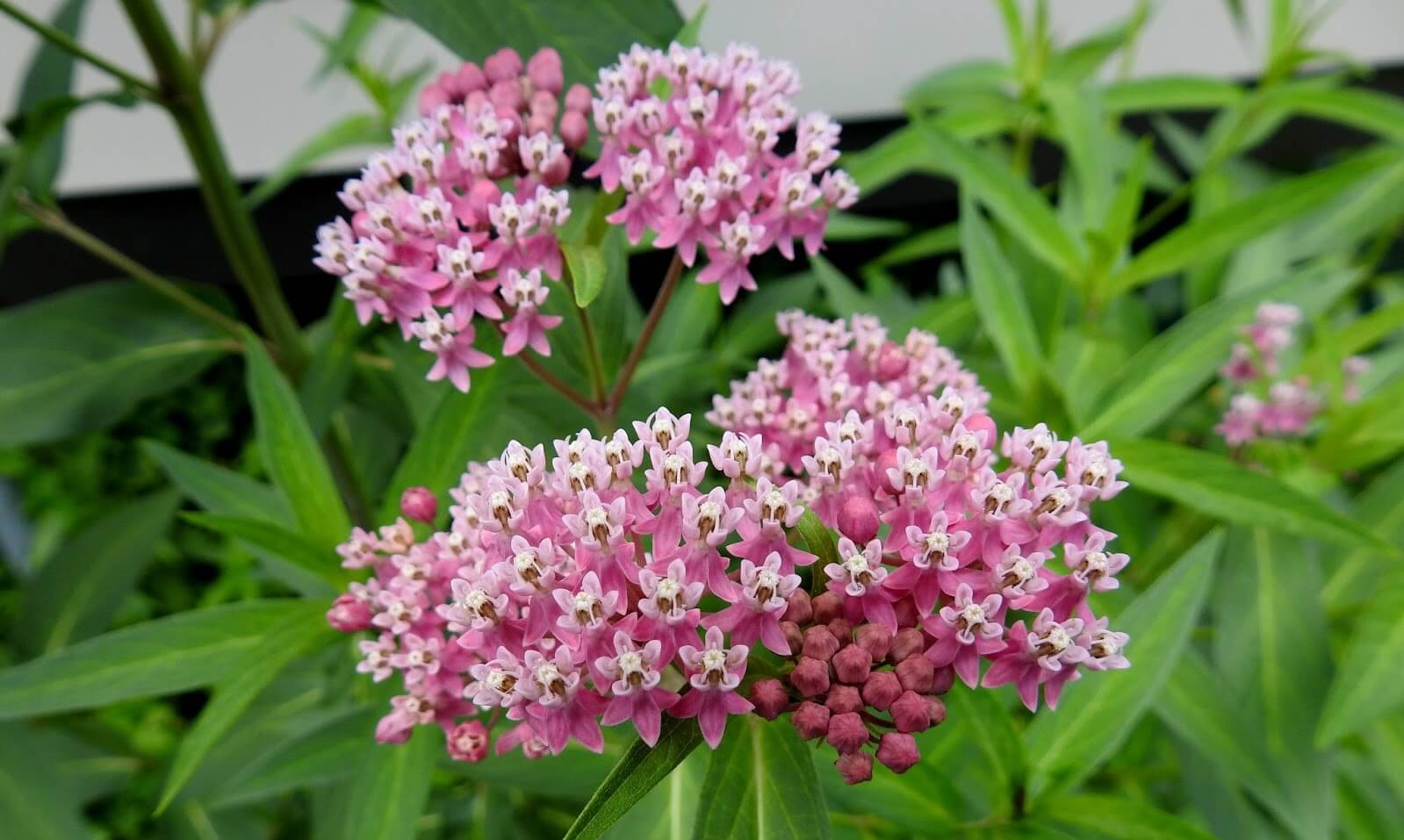 So what is it about the monarch that has people so interested in helping with their conservation? Why, as Wilson put it, have monarchs become sexy?

For one, monarchs are stunning. As one of the largest and most colourful butterflies that can be observed in the region, they stand out and are easy to spot, even to the untrained eye. Furthermore, the monarch’s Mexican migration is a tale that many people know, and there’s something about that journey that intrigues people. Considering it’s a universal story, it’s easy to see why people can relate.

“I think the other thing that catches people is that three or four of the generations live for six weeks each, but the last generation, the one that migrates to Mexico, lives eight months,” says Kempster. “And it’s mind-boggling, like how and why is that even possible? So it’s the mystery of them, I think, that catches people. It’s kind of magical almost.”

“So it’s the mystery of them, I think, that catches people. It’s kind of magical almost.”

Following on the tremendous success of 2019, what does success look like for the Saint John Naturalists’ Club going forward? Club members hope to see even more milkweed seeds and seedlings being distributed in 2020 to continue to support monarch reproduction across the province. As awareness surrounding milkweed and its importance for monarch survival continues to spread, Wilson, England, and Kempster are already seeing the positive effects of their work with more and more monarchs being tagged every year. They encourage everyone to keep an eye out for monarchs in late summer and to spend some time observing them. And if you can, maybe get involved with tagging in your area to get up close and personal with the butterflies.

“The physical contact is a really important component of any encounter with monarchs, if possible” says Wilson. “If we have a session of tagging, if someone isn’t actually the tagging the butterfly, it’s still important that everybody in the group touches a butterfly and sees how stiff their wings are. They’re not like a regular butterfly. How the little hooks on the feet will grab onto you, onto your fingers, and it doesn’t hurt you. It’s really quite unique. And once they make that physical contact, then suddenly there’s a connection there. It’s different than just watching over somebody’s shoulder. And that’s really, really important.” •

How can you get involved?

So as this monarch’s heroic journey continues from year-to-year, what can you do to help make sure that it continues for generations to come? The good news is, it can be as easy as taking action in your own backyard.

Sign up to receive your free milkweed seeds! (While supplies last.)